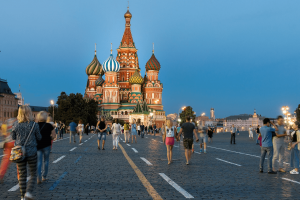 This week’s Bitcoin (BTC) pump was sparked by capital flight from wealthy Russians who rushed to the exits following a wave of the resignation of government officials. The result was an inevitable spike of BTC prices in a moment of FUD that ultimately lifted the cryptocurrency market.

Bitcoin is up because of FUD in Russia

This is according to one Vladislav Ginko, a Twitter commentator who is also affiliated with Russia’s largest state think-tank RANEPA.

The resignation of Russia’s government sparked an interest to the Bitcoin and some other favorite coins among wealthy Russians and led to the Bitcoin spike to $9,000.

At the time of writing, Bitcoin is one of the best performers considering its level of liquidity meaning it is not as fragile and volatile as other altcoins as Bitcoin SV which is up by triple digits week-to-date.

To spell out how emphatic Bitcoin’s performance has been, the coin is up 13% in the last trading week and analysts are upbeat, expecting the coin to surge in going forward.

Notably, Bitcoin, for the first time since September 2019, is trading above the 20-week moving average, a critical support, former resistance level.

As reported by CNN, on Wednesday, Prime Minister Dmitry Medvedev said the whole government will resign following President’s Putin reforms that will not only extend his grip on power beyond the end of his presidency.

His constitutional amendments strengthen the position of the Prime Minister and Government at the expense of the presidency. Critics say Putin is plotting to take over as Prime Minister once his presidential term ends in 2024, albeit with extended powers.

In his resignation statement, Medvedev said:

“Putin outlined a number of fundamental changes to the constitution, significant changes not only to a number of articles of the constitution, but also to the balance of power as a whole. In this context, it’s obvious that we, as the government … should provide the president of our country with the opportunity to make all the decisions necessary for this. And in these conditions, I believe that it would be right, in accordance with Section 117 of the constitution.”

While Ginko’s position may hold water, the wider cryptocurrency community is pinning on this week’s rally to a couple of factors. Technically, Bitcoin was too under-valued after dipping to $6,500 in 2019.

However, others are adamant that Bitcoin’s recovery maybe because of its appeal as a safe haven following the worsening relationship between the US and Iran. That may have also sparked capital flight, pumping Bitcoin which lifted the altcoin market.

The post Bitcoin (BTC) Pump was sparked by Fear and Uncertainty in Russia: Analyst appeared first on Coingape.