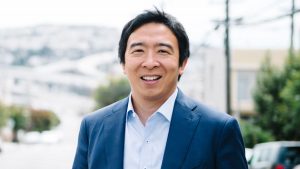 Presidential candidate Andrew Yang has called for clear regulations around cryptocurrencies. Since launching his campaign, Yang has been clear that he supports cryptocurrencies and the underlying technology which he believes the US should be investing in. In fact, he suggested in 2019 that citizens could be paid in crypto under his Universal Basic income plan. His support for crypto has seen the presidential aspirant endorsed by the crypto community.

If Yang wins in the 2020 presidential elections, the crypto community believes he will drive pro-crypto regulations and see the ecosystem grow. This is something that is currently missing with the Donald Trump administration. Trump himself has blasted cryptocurrencies on Twitter, essentially making cryptocurrencies an issue in the upcoming elections. Notably, only Yang among the candidates has made clear his position on cryptocurrencies.

In an interview with Bloomberg Politics, Andrew Yang called for clearer regulations before investing in cryptocurrencies. He noted:

The pro-cryptocurrency aspirant further noted that his priority would be to bring clear and transparent rules. This he explained would allow for a better understanding of the future and maintain competitiveness. The American entrepreneur further echoed that he believes the underlying technology behind cryptocurrencies have great potential and that America should be investing in it.

Is Yang The Best Candidate For Crypto?

Looking into Yang’s past, it is easy to tell why he is a supporter of cryptocurrencies.  From 2000 to 2009, he was involved in a number of startups in which he founded or headed in an executive capacity. He, therefore, understands the opportunities and challenges. His call for regulations is stemmed from his years of being a corporate lawyer.

Andrew Yang’s call is accurate. The ecosystem has in the last couple of years grown exponentially and its regulation remained in limbo. This means that investors, especially Wall Street have been cautious about investing in the industry in fear of a crumb down. If there is better regulation, there is a better understanding of where the industry is headed and this means growth. So once again, Yang has reminded the crypto community why he is their best candidate for the industry.