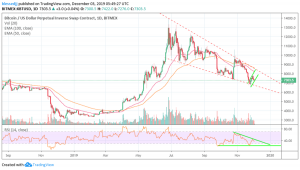 Bitcoin is trading above $7,200; a level a bit higher compared to Monday’s low around $7,197. The price is inclined towards the downside, making recovery a hard nut to crack. The short term ascending channel is providing immediate support.

It is apparent that a break below the channel support would stir declines below $7,000. Besides, the downside move could increase the impact of a bearish pattern trend continuation. In this, the Bitcoin futures contract could re-explore the levels towards $6,500 (November support).

Meanwhile, the immediate upside is facing resistance at $7,300. Marginally toward the north, the 50-day Exponential Moving Average is standing in the way of movement. Moreover, gains targeting $8,000 will have to deal with the resistance at EMA 50 before assaulting the congestion of sellers at $8,000.

As long as the 50-day EMA stays below the 100-day EMA, Bitcoin will continue to grind towards key support levels. Similarly, the Relative Strength Index is pointing south toward the oversold. However, the falling triangle pattern suggests that a reversal in around the corner. The movement towards the 70 could easily see Bitcoin trend above $8,000 as the focus shifts to $9,000.

From a long term perspective, Bitcoin is readying for a significant breakout. The breakout requires that bitcoin longs traders focus on longer timeframes and ignore the short term up and down price actions.