Ray Dalio warns that Bitcoin is too volatile and speculative to be a viable form of money, while gold, in contrast, is “more stable” than the value of money.

If you don’t know who Ray Dalio is, then you haven’t been paying attention to popular financial media. Actually, that may not be a bad thing at all. But in this case, Dalio stands apart from the crowd and is worth listening to. Not only is Dalio known for his honesty and blunt communication style, making everything he has to say interesting, if only for its sincerity, he is also the 68-year old founder of the world’s largest macro hedge fund, Bridgewater Associates, with $150 billion under management.

During an interview with CNBC, Dalio warned that Bitcoin is “in a bubble,” and that the speculative fervor surrounding bitcoin is only serving to weaken or damage its functionality as a medium of exchange and store of value.

“There are two things that are required for a currency. The first thing is that you can transact in it, it’s a medium of exchange. The second thing is it’s a store of value. Bitcoin today…you can’t spend it very easily.

Dalio also warned that Bitcoin’s privacy features are about to be compromised as US authorities work to trace bitcoins back to their owners; an effort that will affect both honest citizens seeking privacy in assets and transactions as well as criminals intending to use bitcoins to launder money and evade taxes. The IRS is currently suing one of the most prominent bitcoin exchanges, Coinbase, demanding customers’ transaction records.

“The idea that it will be private in terms of transaction…in other words people won’t know what you’re doing and it will be a private currency…is really questionable.”

But the main warning stems from the observation that Bitcoin is up 300% for the year, a figure that Dalio claims is fueled by market speculation versus functional usage. What else can this be other than a bubble?

“We take these criteria, and we define a bubble based on those criteria, bitcoin is a bubble. It’s a shame – it could be a currency, it could work conceptionally, but the amount of speculation that’s going on and the lack of transaction, the idea that it will be private in terms of transaction…is really questionable if you look at what’s gone on in terms of governments to examine it.”

And yet another important thing to consider is that fact that Bitcoin is not the only game in town. There are over 100 cryptocurrencies in existence. Bitcoin’s second runner-up, Ethereum, with a market cap of $27.3 billion (versus Bitcoin’s $66.3 billion), is a viable competitor at a seemingly discounted price. But again, that’s just 1 competitor out of a hundred. Such a competitive environment adds complexity to the crypto-investment landscape; a terrain that most investors still find unfamiliar, making investment decisions extremely difficult given the lack of information or the lack of ability to adequately analyze such information.

In a previous article, we analyzed the phenomenon of Bitcoin’s fall against the words of JPMorgan CEO Jamie Dimon. Bitcoin fell from a high of $5,000 and briefly dipped below $3,000. That’s a lot of volatility. Of course, what many people didn’t know was that JPM was one of the largest buyers of ETNs (exchange-traded notes) linked to Bitcoin, notes that traded on Nasdaq Stockholm. An open contradiction on JPM’s part, were they acting fraudulently, given that Dimon’s expressed opinion contradicted JPM’s investment actions? It makes you wonder.

Despite years of negative forecasts and comments, Bitcoin has defied popular and expert opinion. Even Howard Marks, a billionaire investor who has railed against Bitcoin in his investment newsletter, had to admit he was wrong, finally admitting that “I see no reason why Bitcoin can’t be a currency.”

If you take a look at the chart below, you can see the effect that Dimon’s comments and China’s announcement to close exchanges had on the currency: extreme volatility leading to a price level that has more or less remain unchanged. 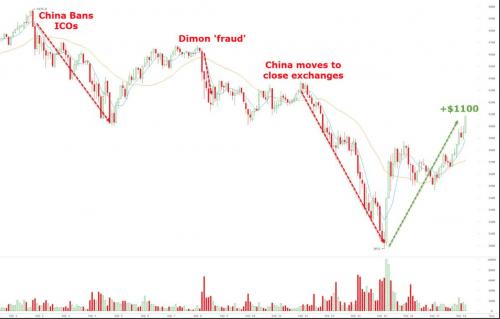 But, is there any possibility at all that both Dalio and Dimon, like Howard Marks and most of the anti-crypto crowd, might simply be wrong in their assessment of Bitcoin?

This article originally appeared on https://gsiexchange.com/