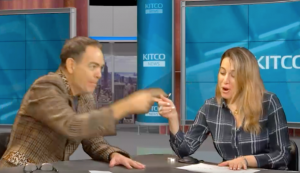 In a recent interview by Kitco News, Max Keiser, Bitcoin supporter and founder of Heisenberg Capital, called bitcoin skeptic Peter Schiff aka Goldbug an “imbecile”. Schiff, however, simply used Keiser’s comments from the interview to support his opinion that Bitcoin would be bearish while gold would be bullish in the future on Twitter. Crypto influencers trolled Schiff on the thread, but another tweet war ensued and a crypto analyst known as Crypto Loomdart on Twitter took a dig at Schiff for having found one of the few “bitcoiners” that he considered “human filth”.

Why Did Max Keiser Call Peter Schiff an Imbecile?

At one point in the interview, the interviewer, Daniela Cambone, that Keiser was one of the few people who had made a case for both Bitcoin and gold, whereas other people just loved to pit the two assets against each other. To this, Keiser responded that people did not equal Bitcoin with money the way they equated gold with money. He further said that bitcoin was superior to gold and fiat money because of the simultaneous settlement it offered.

“With Bitcoin, when you do a Bitcoin transaction, the transaction is the settlement,” said Keiser.

Till that point, Keiser was talking in his usual, energetic tone. But the energy soon turned to aggression, as he pointed that some people did understand that Bitcoin was just as scarce, divisible, portable and desirable as fiat money and gold. Targeting Peter Schiff, he said that he did not spend 5 minutes trying to understand Bitcoin and called him an “uninformed imbecile”. He repeated the expletive several times before he calmed down.

How Did Schiff Respond to it?

Despite having been called an imbecile on a public platform repeatedly, Peter Schiff responded relatively calmly. In fact, he turned around the situation to his advantage. He picked the point about Keiser declaring that China was going to launch a digital currency backed by gold to share that that would be bullish for gold and bearish for bitcoin, indicating that it was gold that was going to win over bitcoin.

However, Peter’s tweet was raided by crypto supporters. From calling his support of gold in the tweet as “one of the worst market calls in history” to saying that currency did not need to be backed by anything if it was intrinsically sound, crypto Twitter left no stone unturned in criticizing Schiff for his stance.

But, Max Keiser Wasn’t Spared Either; Got Equated With “Human Slime”

If crypto Twitter attacked Schiff, Max Keiser wasn’t lauded for his doings either. A crypto analyst known as Crypto Loomdart on Twitter took a jibe at Peter Schiff for having found one of the very few bitcoiners who, according to him, were such “filth” that he would consider them “human slime”.

He further went on to call Keiser one of the biggest scammers in crypto by creating a scam coin and then dumping it.

Many other users also echoed similar sentiments about Keiser. Anthony Sassano pointed to all the shitcoins he had promoted on his show over the years and BitBit commented that even after Maxcoin, Keiser had run scams including “Start” and “Quark”. Another Twitter user, RentARocker, listed even more of the scam coins that Keiser had promoted.

Share your views with us in the comments below!