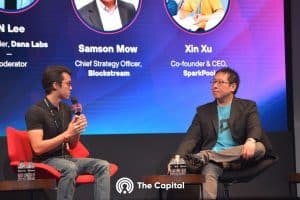 Samson Mow, the CEO of Blockstream, once again attacks proof of stake coins calling the consensus algorithm “a joke”. During a panel discussion on the “Proof-of-Work, Halving and the Future of Mining” at The Capital, an event hosted by Coinmarketcap in Singapore, Mow shared his opinions on the staking system and whether it is a threat to the proof of work  (PoW) consensus that Bitcoin, Ethereum, Litecoin, etc. employ.

Samson Mow: “Proof of Stake is a joke”

In a rather quiet session for the freak-Tweet CEO of Blockstream, Samson ended his time on the panel calling out the staking process. In a backstage interview Mow spoke on what he meant on POS algorithms saying,

“I just said proof-of-stake is a joke. But people haven’t gotten the joke yet.”

He further backed the statements saying the POS systems do not work – at least in security terms – given the complexities needed to actualize security. He added,

“But if you talk to any serious computer science person, they will tell you that proof-of-stake doesn’t really work because it is essentially perpetual energy.”

In comparison to how PoW works, Samson analogized the two consensus algorithms using the pot and gold ring. While PoW ensures almost certain security, PoS systems rely on trust between the stakes to keep the system safe – a loophole that can be used by external actors to infiltrate the system.

Mow: Ethereum should not move to PoS

Ethereum community has for the longest time debated on the possible move to a proof of stake model from the current PoW. However, according to Samson, the idea to move to PoS creates a possible loophole that can see the blockchain’s security suffer. In the case where an external chain, directly competing with Ethereum, gains enough staking control on ETH may have a profitable need to destroy the platform.

“But what if you have a competing network? What if you have Justin Sun with Tron, who’s trying to overtake Ethereum? So he could just buy out some of the stakes and attack the network. Or a hacker.”

The post Proof of Stake is “a joke”, Blockstream’s Samson Mow Says at TheCapital Conference appeared first on Coingape.