The cryptocurrency world is riddled with various kinds of scams and hacks, and the latest is House of Commons email scam.

Scammers are known to use methods of deception to lure innocent users into revealing valuable information that can lead to a possible hack or scam.

Hackers and scammers in the cryptocurrency sphere and otherwise seek new methods of scamming every day and get ingenious at it. In the past, scammers have known to be impersonating Elon Musk to fulfill the scam among various other examples.

Scammers are now disguising as the British House of Commons’ officials in an email that even bares a registration mark in an attempt to make it look legitimate.

To add further legitimacy, the subject reads in an ambiguous combination of letters and numbers with the word Committee, perhaps in an attempt to make it sound important. 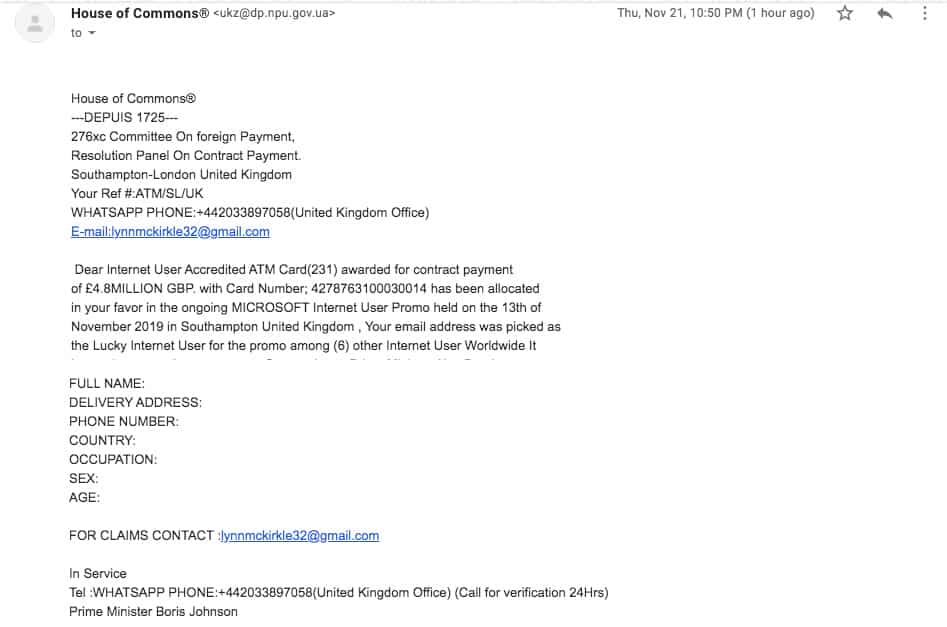 The matter of the House of Commons email scam lures the reader into giving away their confidential data, including information that is helpful in scamming hacks and identity theft such as age.

Dear Internet User Accredited ATM Card(231) awarded for contract payment of £4.8MILLION GBP. with Card Number; 4278763100030014 has been allocated in your favor in the ongoing MICROSOFT Internet User Promo held on the 13th of November 2019 in [the] Southampton United Kingdom , Your email address was picked as the Lucky Internet User for the promo among (6) other Internet User Worldwide It is very important that you contact Secretaries to Prime Minister Alex Burghart, with the following information’s

The email then goes on to ask for a full name, address, delivery address, telephone number, age, and other personal details.

The scammers then very boldly put the number with a “Call for verification 24Hrs” tag and the name Prime Minister Boris Johnson.

The introduction of the email is no less complicated in a similar attempt to make it look boldly legitimate while the only give away are the sender’s address and a private email address for the claims contact person. 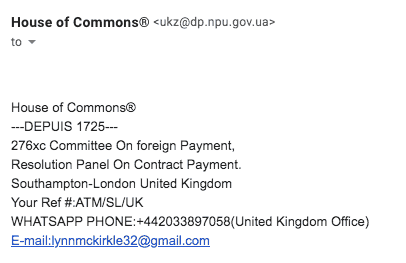 Cryptopoitan.com team tried to contact the House of Commons email scam team on the what’s app number; however, no response was received at the time of publishing.

Developing story: We will update information on the response from the House of Common email scam team when and as we receive it.