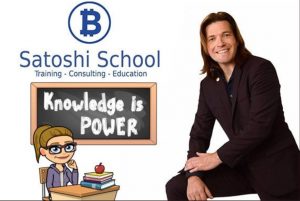 A person named Jorg Molt has been claiming to be the co-founder of Bitcoin and that as founder he owns 250,000 BTC (worth $2.2 billion). Apparently, he is using this lie to dupe conference organizers and investors.

He has also authored a book on Bitcoin, The Generation Bitcoin, published in July 2018. The book is available on Amazon, which has also received comments regarding his fraud.

In the video, the claimant Jorg Molt says he “loves Bitcoins” and has quite a bit of money for it.

According to another video resurging on the internet on Jorg Molt sees his ex-wife talking about him. Lina Seiche, the Global Marketing Director for BTSE crypto Exchange tweeted,

Jörg Molt’s (German #Faketoshi) ex-wife spoke out about his scams a year ago:
– he owes money to at least 6 people
– he‘s not paying alimony for his two kids
– when the #Bitcoin WP was released, he didn’t even own a computer (video link in tweet)

Andreas Antonopolous, a prominent Bitcoin educator warned the netizens of Jorg Molt, who is using a photograph with Antonopolous to validate his lie. Andreas tweeted,

Apparently, a German person called “Jorg Molt” has been showing a selfie taken with me and telling people that we are friends This is a LIE. I don’t know him at all. I have heard from others that he claims to be the founder of Bitcoin and has thousands of BTC. A LIE.

According to Antonopolous’s recent tweet, Angela Reifli, one of the ‘known associates’ has contacted his. He said,

I’ve been contacted by one of Jorg Molt’s “known associates” @AngelikaRiefli1, and told to stop spreading “rumors and lies”. Apparently she is someone who works with Molt in promoting his “businesses”.

Only recently, Molt deleted his twitter account as well. Hence, there is little evidence against him on Twitter that newbies can refer to. Moreover, he has registered himself with several conferences and events as the co-founder. When one googles Jorg Molt, he/she will see a list of places where is registered as an expert on blockchain and Bitcoin co-founder.

Hashtags #JorgMolt and #fraudster have become quite popular on crypto-twitter. People are sharing posts and proofs of his fake claims all over to alarm possible victims.

He has been attending conferences as a guest of honor charging hefty fees and also runs an educational portal named Satoshi School.

Bitcoin’s creator/s with the alias, Satoshi Nakamoto remains anonymous to date. The real identity can be easily verified by a set of codes that only Satoshi could hold at the time of creation. The 1 million Bitcoins that are held in the creators’ address haven’t been moved to date.

Do you think that the real Satoshi Nakamoto would ever reveal his true identity? Please share your views with us.

The post Fraudster Claiming to be Bitcoin Co-Founder Duping People for Over a Year appeared first on Coingape.