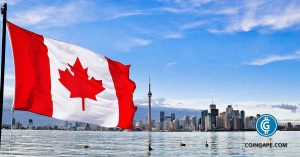 In a recent development, Canada has launched yet another stablecoin. The new stablecoin has been named CUSD and is pegged to the US Dollar.

CUSD similar to its forerunner CADT, (backed by the Canadian Dollar) has been developed by Blockchain Venture Captial Inc., a Canadian blockchain-based company. The latter will facilitate cashless transactions with the pledged value of USD. It is backed by USD stored in escrow accounts run by US-based financial institutions. Furthermore, BVCI will allow for real-time settlements between CUSD and USD.

With BVC Pay interface, users can purchase CUSD and then transfer into their digital wallet. As a matter of fact, BVCI complies with all federal regulations governing the transmission of virtual currencies. It has been duly regulated by Canada’s FINTRAC as a money service business.

In a span of 4 months, this is the second stablecoin that has been launched in Canada. On the occasion of Canada Day, the 1st of July CADT was launched. It is one of a kind global stablecoin which has been backed by the Canadian dollar.

Singapore To Soon Have its Own Stablecoin

In another development, Singapore-based fintech platform Xfers recently announced plans to launch its own pilot stablecoin initiative called StraitsX, in partnership with blockchain platform Zilliqa. The project will be named XSGD and will be pegged 1:1 to the Singapore Dollar (SGD). The initiative is set to be supported by companies such as Binance Singapore, CoinHako, Coinut, Sparrow, Tokenize Xchange, and Wowoo Exchange.

On the 5th of September, leading cryptocurrency exchange Binance announced the launch of its stablecoin, Binance USD. For the same, it partnered with Paxos, a digital asset trust company. Furthermore, Binance USD (BUSD) has received support from New York’s Department of Financial Services (NYDFS).

The world is gradually warming up to the idea of stablecoins, and this spells a big win for crypto and blockchain, apart from the fact that stablecoins will disrupt the payments industry. Which will be the next nation to roll out a stablecoin? Let us know what you think in the comments below!

The post Crypto Adoption: Canada Gets a New Stablecoin But it is Not Backed by the Canadian Dollar appeared first on Coingape.