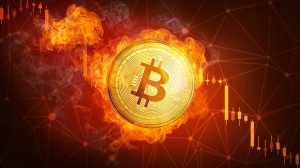 Stocks took a hit last Friday as trade tensions owing to the US-China trade deal continue to prevail. While the Dow Jones Industrial Average(DJIA) fell by 1% reaching 26,666 points, S&P Futures fell down to 3,085 points. Interestingly, stock prices have always indirectly affected the Bitcoin price. However, this time the case looks a bit different. First, BTC price came down to $9,200 mark and then went on to slide past the $9000 level and is presently trading at $8,802.

While the prices are down, it has also raised expectations of an upcoming bull rally. However, BTC revisited the $9,500 level only for a brief period of time. Subsequently, even the bitcoin fear and greed index fell from 54 points to 42 points, returning into “fear” territory.

Furthermore, it is being predicted that Bitcoin faces another set of losses and the sudden spike above $10,000 was a temporary price rise. As a matter of fact, the Bitcoin price still holds the ability to rally by $1000 in a day. Presently, the chances of Bitcoin staying above $9,000 look bleak. Moreover, crypto exchanges are also facing significant selling pressure. The buying pressures are not that enough to push Bitcoin price any further.

Furthermore, 1.7 MM shorts and 57 Million longs have been liquidated on BitMEX platform, as per data provided by datamish.com

While the exact cause of this sudden price drop remains undisclosed. It is also likely that the price drop was due to whale price movements. It has been time and again contested that if whales actually affect prices. However, owing to Bitcoin’s relatively short history and erratic trading patterns, it is not a false supposition that whales do impact Bitcoin prices to a larger extent.

Will Bitcoin’s price fall further? Let us know, what you think in the comments below!