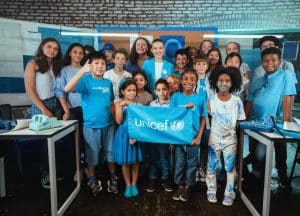 The United Nations’ children welfare agency, UNICEF, today announced the formation of the UNICEF Crypto Fund. The prototype will begin with accepting Bitcoin and Ethereum donations.

Christina Lomazzo, United Nations Children’s Fund’s first head of blockchain, is spearheading the project. Currently, UNICEF subsidiaries in the US, France, Australia, and New Zealand have signed up to the fund.

The proceeds of the donation will be invested in blockchain projects that favor UNICEF’s cause. The contributions in BTC and ETH will not be converted into FIAT or any other investment asset as well; it will be put directly into the development of blockchain. The Crypto Fund will be put into innovation projects on the blockchain.

The funds have been limited to no more than 1,000 Bitcoins and 10,000 Ether. The fund has already received its first donation of 1 BTC and 10,000 ETH from the Ethereum Foundation. In total, the existing Innovation Fund has already backed six blockchain companies in a portfolio of 72 companies from 42 nations.

Small Steps for the UN or a Giant Leap for Crypto?

The investments in crypto have been limited at the moment. Moreover, the organization receives billions in donations every year. Whereas, the Crypto Fund will be working only with the blockchain innovation at the moment.

Nevertheless, it marks the beginning for the UN to start accepting crypto donations. Lomazzo told the press,

“What we really see it as is being ready for a digital future.”

Benefits of the Crypto Fund

Crypto funds can be successfully tracked on the public ledger of blockchains like Ethereum and Bitcoin. Hence, crypto donations mark the beginning of the process of verifiable donation. That is, there is complete transparency in the use of the contributions.

“We’re working on a way to actually have a visual that’s reading from each chain that shows money going in and flowing,” says Lomazzo. “So, you no longer have to trust in the organization that the money has gone there. You can actually go ahead and verify yourself.”

Furthermore, innovation at the United Nations Plaza is not subject to regulatory oversight. Due to the UN’s extraterritoriality, it has the freedom to operate it’s fund independently. This encourages the inclusion of crypto in the various national NGOs as well. However, the regulations in the countries again form a road-block.

“The Ethereum Foundation is excited to demonstrate the power of what Ethereum and blockchain technology can do for communities around the world.”

How long do you think before crypto will join the mainstream donations arm at the UNICEF? Please share your views with us.