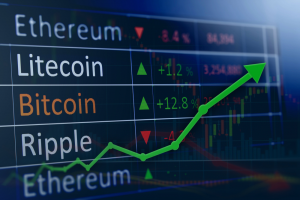 In the past six months, the price of BTC and other major altcoins swung strongly as Q1 and Q2 gains were quickly wiped out in Q3’s bearish momentum that saw BTC’s price drop to current $8,200 support levels. This represents a whopping 30% dip in BTC’s price while large cap altcoins saw drops of between 35%-50% during the quarterly period.

According to data on Skew Markets, the correlation index between the top 10 cryptocurrencies is at a six month high at 82.8%. In a tweet explaining the high correlation in price movement across the 10 largest cryptos, the data and analytics firm wrote,

Bitcoin’s burgeoning dominance (both in market capitalization and trading) at the start of Q2 and through Q3 temporarily hit highs above 70% in market dominance. This influence is further amplified by being the coin with the most trading pairs with the large cap coins. In essence, in Q3 Binance announced trade volume of BTC pairs to stable coins (Tether accumulating 95% of these trades) account for 45% of the total trades on the exchange.

Despite BTC’s dominance dropping in the third and fourth quarter to around 66%, the pioneer cryptocurrency’s influence on the trading volume of the large cap coins remains clear on exchanges –especially those without fiat-to-crypto trading.

BTC/ETH Correlation at its Highest Point Since March

The 1-month realized correlation between the two cryptocurrencies is at its highest point since March this year, at the start of the bullish momentum in the cryptocurrency market.

The post Price Correlation Between Top 10 Cryptos at Highest Point Since May appeared first on Coingape.