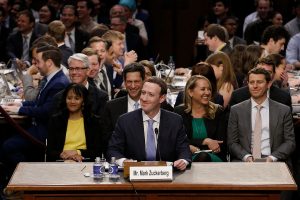 The US Senate House of Financial Services Committee has been completely opposed to Facebook’s cryptocurrency project, Libra. Much of their disagreement is steeming from their dislike for Mark Zuckerberg. Reportedly, the Committee under has asked him to testify before January 202.

“We need to get Mark Zuckerberg here!” – Senator Sherman during David Marcus’s (Libra Head) hearing on 17th July with the committee.

Although David Marcus tried to emphasis on the fact that Libra would work independently of Facebook Inc., Congress-men and women were not satisfied with the response. The sheer user base of Facebook (about 2.38 billion) likely makes it the leading member and benefactor of the council.

Facebook Inc Chief Operating Officer Sheryl Sandberg has earlier agreed to testify before Oct. 29. However, the congression source told the media that it would not accept Sandberg’s testimony and instead asked Zuckerberg to attend.

On the progress from the Association, Libra has planned a meeting of the initial governing council members in October. However, reportedly, leading members are getting cold feet because of the regulatory oversight on the proposed plan. MasterCard, Visa, PayPal, and Stripe Inc. have started to show signs of backing out. The involvement of firms in the October meeting will be critical for the project.

Facebook’s Libra has received a lot of criticism from the Central Banks of the world. The main reason for worry has been the capital outflow from central banks to the new Libra Reserve. Recently, the CEO of Apple, Tim Cook, reiterated the same. He told Les Echos,

“No. I really think that a currency should stay in the hands of countries. I’m not comfortable with the idea of a private group setting up a competing currency,”

If Zuckerberg agrees, he can also expect the Senate House to dig up the past and defame Mark for breach of privacy in the past. As CEO and Founder, he was heavily criticized for their unethical involvement in the US Presidential Election of 2016.

Furthermore, in another recent congressional meeting of the SEC with the House of Financial Services Committee, the argument for Libra as ‘security,’ ETF, or mutual funds became widely accepted. While the SEC refrained from making any direct statement on the matter, it would be one of the most important topics of their hearing.

Do you think Zuckerberg would testify before congress for Libra or threat its end? Please share your views with us.