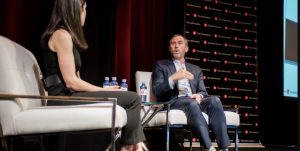 The CEO of Ripple, Brad Garlinghouse has claimed that Ripple signs at least 30 new deals on a weekly basis. While making this known, Garlinghouse, also emphasized on the future prospects of the controversial Facebook Libra, remarking that Facebook’s launch of Libra was an arrogant move by the social media giant.

Ripple On A Development Spree

Brad Garlinghouse, CEO of Ripple while speaking at The Information’s annual subscriber summit, held in Menlo Park, California, on Thursday, disclosed that Ripple was on a development spree and as such, signs about 30 new deals on a weekly basis with financial institutions. According to Brad, the blockchain firm which acts as a bridge between blockchain and traditional banks also owns more than $300 million worth of cash and claimed that Ripple didn’t need to raise any capital.

Brad Is Not Friendly With Libra

Garlinghouse weighed in on the much talked about the launch of Facebook’s Libra. He maintained that Facebook’s approach to launching Libra was rather arrogant. Further emphasizing his stance on the matter, Brad expressed that the regulatory opposition being faced by Libra is a because of its founding company, Facebook. He added that if Libra was introduced by a company like PayPal, it most probably would have passed regulatory scrutiny much earlier.

“I think that the way they approached it demonstrated, frankly, [from] my point of view, arrogance in how they rolled it out,” he said at The Information’s annual subscriber summit. “I think Facebook did not appreciate the trust deficit they had.”

Earlier, Coingape reported that Garlinghouse had predicted that Libra wouldn’t launch until after 3 years. He had stated further project developmental adjustment and regulatory concerns as the reasons for his opinion.

XRP remains one of the top altcoins within the crypto ecosystem. Maintaining its spot immediately below Ethereum, Ripple stands at the third rank by market capitalization on CoinMarketCap (CMC). The top cryptocurrency began the quarter quite slowly. Hovering around the $0.3 area, XRP has gained about 7% within the past 2 weeks.

The post Facebook Was Arrogant in the Way it Rolled Out Libra Says Ripple CEO appeared first on Coingape.