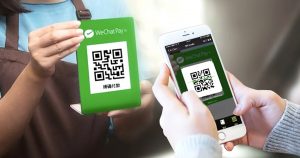 Binance CEO, CZ in a recent tweet shared that now WeChat pay in Shenzhen is putting its receipts on the blockchain. WeChat is a Chinese multi-purpose messaging and mobile payment app developed by Tencent. Is it a hint enough that WeChat pay will soon support crypto payments as well?

Cz’s tweet led to a series of tweets by the crypto twitter asking about the blockchain is being used is it a new blockchain or the  Bitcoin blockchain. Further, tweets went on to laud China’s technological efforts and said the Chinese were living in the future.

Earlier in May, WeChat updated its privacy policy which confirmed that merchant accounts which found dealing in cryptocurrency transactions will be terminated soon. WeChatPay’s parent company Tencent even issued key measures to effectively monitor crypto activities. These included forbidding users from using Wechat payment to make crypto transactions. This was accompanied by real-time monitoring of daily transactions and risk assessment of any suspicious transactions.

Binance Adds WeChat and AliPay to its Fiat Gateway

Two weeks back, Binance announced that it is all set to add WeChat and Alipay to its fiat gateway. The initiative is currently in a testing phase for Android users and will eventually be fully rolled out on iOS and Web. WeChat and AliPay emerged as the most popular payment processors for crypto traders after Chinese regulators announced a ban on the functioning of crypto exchanges.  WeChat pay remained unavailable for comment at the moment. It is interesting to note how the technologies across the world are recognizing the prowess of blockchain and are keen on adopting it.

Will Chinese regulators lift the ban on crypto trading? Will WeChat Pay integrate crypto payments in the future sometime? Let us know, what you think in the comments below!