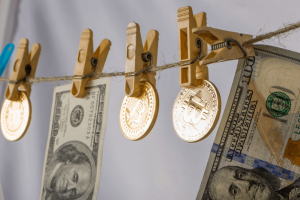 While the Fed Chairman ascertains that this is not ‘quantitative easing,’ but organic growth measures, experts are growing increasingly apprehensive of another recession.

I’ll go out on a limb here, but a financial system that requires over $100B of liquidity injections every day, temporary, permanent or otherwise, has major issues.

In total, the Feds injected a massive 60% “temporary” increase in the liquidity of repo markets. However, financial experts suggest that things could get a whole lot worse than in 2008.

Still, the market price action is still favoring the equity markets rather than hard money like gold. The S&P 500 Index is near is All-Time High above $3000. Yesterday, it gained 8 points, currently trading at $3004.

The liquidity injection by the Feds comes as positive news for the equity markets. Nevertheless, it could have long-term adverse effects on the economy.

Which is better hard money: Gold or Bitcoin?

The first half of 2019 saw a tangle between gold buffs and Bitcoin supporters. The aim was to win the stance of being the best ‘hard money.’ While gold has a history of thousands of years, Bitcoin has grown exponentially in the past decade. The debate is purely based on a belief system.

Peter Schiff, the CEO of Euro Pacific Capital, has been a strong critic of Bitcoin. However, in one of his recent tweets, he affirmed that he is not a ‘Bitcoin Hater.’ He said,

People need to stop referring to me as a “Bitcoin hater.” I don’t hate Bitcoin. There is nothing there for me to hate. I just don’t believe that #Bitcoin will work as money, and that people who are betting that it will are going to lose a lot of theirs. Just buy #gold instead!

Bitcoin or gold, the traction has hard money has gained in 2019 is considerable. The age-old gold has acted as a hedge against the economy as far as the financial history goes. Gabor Gurbacs, the CEO and digital assets strategist at VanEck tweeted on the #dropgold vs Bitcoin campaign,

Furthermore, Bitcoin and cryptocurrencies are highly volatile assets. Hence, the leverage and dropdowns in cryptocurrency portfolios are a lot higher than gold. Hence, while money management points towards hard money in the long term, the belief system is what matters in the end.

Do you think that Bitcoin will benefit from the impending economic slow-down? Please share your views with us.

The post Bitcoin Vs Gold: US Feds Inject $55 Billion for “Not QE” – Will Hard Money Rise? appeared first on Coingape.