Chinese online payment platform, Alipay has been reported to decline transactions related to bitcoin and any other cryptocurrency. This was made official by the organization when it updated its official Twitter handle with the information.

According to Alipay’s Twitter post on Thursday, if any transaction relates to either bitcoin or any other cryptocurrency, the giant Chinese online payment system would immediately stop the relevant payment services.

Preceding this confirmation was the fact that Alipay does not support any form of crypto transactions on its platform. It made this known after revealing that it received several reports that the platform supported bitcoin transactions.

If any transactions are identified as being related to bitcoin or other virtual currencies, @Alipay immediately stops the relevant payment services.

The Chinese online payment platform, Alipay was also said to have been banning accounts involved in Bitcoin OTC trading. A certain Twitter user had posted this on Twitter in August last year.

Alipay is a Chinese intermediary online payment platform which was started in February 2004. Based in Hangzhou, the popular Chinese organization overtook PayPal as the world’s largest mobile payment platform in 2013. The platform boasts of about 900 million customers.

This news comes amid a recent report that popular cryptocurrency exchange, Binance added Alipay and WeChat to its fiat gateway. According to a report by Coingape on Wednesday, the integration will allow Binance users to deposit fiat into the exchange using Alipay or WeChat. This was publicly announced on Twitter by a user who asked for an official confirmation regarding this update, tagging Binance CEO, Changpeng Zhao, CZ in the process. CZ responded to the inquiry by tweeting “YES”, thereby confirming that AliPay andWeChat had been added to Binance’s fiat gateway. 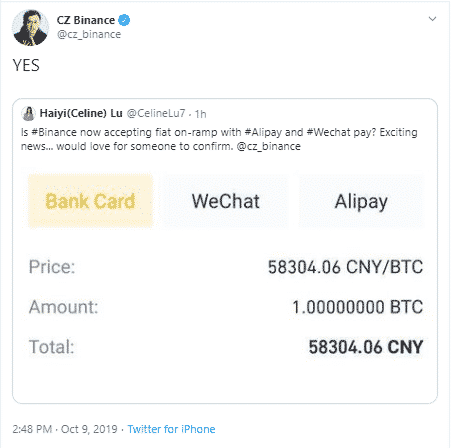 Moving forward, Alipay seems to have a role to play in the adoption of China’s underway cryptocurrency. Platforms like Alipay, Tencent and WeChat have been listed among the payment platforms where it will be possible to use the yet-to-be-launched digital currency from the People’s Bank of China.

The post Alipay Denounces Bitcoin Transactions After Binance Adds it into its Fiat Gateway appeared first on Coingape.