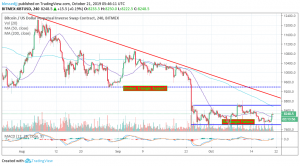 Bitcoin traders are supposed to be exercising the utmost caution due to the current trend. Besides, market volatility is back to the roof. The four-hour chart shows Bitcoin price trading in a newly formed rectangle pattern. According to jacobcanfield, an analyst on Tradingview:

“The Rectangle is a clearly defined level of support and resistance that acts as a ‘pause’ or ‘congestion’ in the middle of a trend. It is mostly seen as a continuation patterns by classic technical analysts and traders, but can be a reversal depending on volume flow and a breakout from the range with the top of resistance flipping as support.”

In the event the rectangle support is ruptured, Bitcoin is likely to disintegrate to $6,400 (measured move). Moreover, $6,400 is remembered as a very viable support area during the downtrend in 2018. The region also provided an anchor when Bitcoin briefly dived in May this year.

Meanwhile, Bitcoin is trading above $8,200 after recovering from the support at $7,800. The recovery initially stepped above the 50 Moving Average (MA) after gaining traction above $8,000. While the move to $8,300 was majestic, the trend failed to make headway towards $8,400.

For now, we could say Bitcoin is in a bullish range between $8,200 support and $8,300 resistance. However, a possible death cross could boost the above rectangle scenario. A death cross occurs when the 50 SMA crosses below the 100 MA.

The Moving Average Convergence Divergence (MACD) shows that the momentum is in the favor of the bulls. A positive divergence means that buyers will continue to increase their entries in the near term.