Bitcoin steep price movement against China’s currency Yuan is indicating that it can manifest as a safe “haven” for people hedging the Yuan’s depreciation.

A recent Bloomberg report reveals that Bitcoin reached a record inverse relationship in the past week. The finding comes as a part of Bloomberg’s analysis of 30-day correlation. 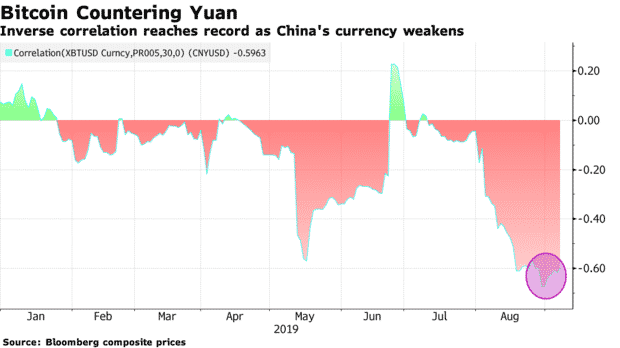 Dr. Garrick Hileman, a researcher at the London School of Economics and Blockchain.com’s research director said,

“There’s corroborating evidence for this, in that people in Asia were paying more for Bitcoin than elsewhere when the yuan fell. You can see it in the premium price paid sometimes for Bitcoin in exchanges like Huobi that primarily cater to Chinese.”

The inverse correlation “became more evident also in April and May, and as the tensions ratcheted up with the deterioration on U.S.-China trade relations,”

US-China Trade Wars As The Standalone Cause

Speculations are rife that the China effect continues to weaken Yuan and slow the economy. While the trade wars brought immense devastation by U.S-China trade war for both the countries, it has been a positive development for crypto. Leading crypto analysts Ben Swann and Rocky Miller of Bitsian said that Chinese investors are moving a large portion of their asset from the Chinese Yuan to cryptocurrency especially Bitcoin in anticipation of the impact of the worsening war.

DailyFX’s senior currency strategist Christopher Vecchio in an interview with Kitco said that Bitcoin price has been inversely proportional to the Chinese Yuan since the war started. While Bitcoin continues to rise steadily, Yuan, unfortunately, doesn’t share the same fate. He further said that a possible reason could be the ease around which Bitcoin can be easily used to move money across borders. However, this is not the case with Yuan, at least not at this time.

“In an environment where the global financial system looks like it is potentially at risk because of the world’s two largest economies going at odds, people may be looking for alternative avenues to find ways to circumvent the capital controls being put in place to move their money around without the Chinese or U.S. government taking stock of it,” he said.

As Chinese investors look for more ways to move their wealth around without being controlled by the U.S or even China, more money will flow into cryptocurrency unless the two countries decide on ending the war earlier. With the advent of more money transfer mechanisms like SWIFT, it is likely that Yuan will depreciate further.

Enthusiasts continue to be intrigued with what impacts Bitcoin’s price. The anonymity and the unregulated nature has allegedly kept the movers and shakers in shadows. It would not be wrong to compare it to the case of gold vs Brent crude-oil futures. In this case, the precious asset climbs when the most- traded commodity witnesses a low.

The post Why Ongoing US & China Trade War Might Fuel The Next Bitcoin Bull run? appeared first on Coingape.