If otherworldly beings were to visit Earth, they would be dumbfounded with the notion that we call our age the ‘information century.’ For a point of time where we have access to an abnormal amount of information, we also have an abundance of false information. There is so much incorrect information today, particularly in the media industry, that we came up with a word for it: ‘Fake news.’

According to data from the European Information Oversight Authority (EIOA), around 33% of all news articles published in the EU contain purposely distorted false information. What is the point of reading our morning papers then if we have to research every single fact? Research is hard and cumbersome, and detecting false data is not so intuitive.

A perfect example of misleading facts is the section above. Were you astonished by the fact that every third article contains false information? I would be too if I knew that the research in question existed, considering that there is no such thing as a ‘European Information Oversight Authority.’

To be truthful, humans are prone to error. While most information is not always deceptive, most people make the mistake of believing something that is already established without doing the research themselves.

If only there was a piece of technology that could help us publicly track transactions, verify data, and research immutable information, something like wasting taxes wouldn’t be possible. Even a global economic crisis similar to the one in 2008 wouldn’t be potential without discovering unethical rating agencies and financial institutions.

Coinciding with the height of the 2008 global crisis, an anonymous individual named Satoshi Nakamoto released the Bitcoin whitepaper. Doing so, Satoshi has invented the first blockchain network, a distributed public ledger that uses cryptography to record and verify immutable information.

Ironically, Satoshi created trust in a technological form in the same year trust led to a financial collapse. Remember the difference between inaccurate and malicious information? Trusting something or someone doesn’t make it real nor dependable. That’s why we programmed computers to create relationships based on trust instead of relying on other people. Now that the dust from the previous recession has settled, we can finally prepare for the next one.

According to research conducted by the networking giant Cisco, 10% of the world’s GDP will likely be stored on blockchain networks by 2027. Within the next two years, the report proposes that the total value of the blockchain market will be equal to $9.7 billion. For comparison, the number is close to the combined amount of Japan’s and Germany’s GDP.

Why do giant corporations like Cisco place so much trust in blockchain to succeed? The reason for this is presumably blockchain’s capability to create a network of trusted relationships between enterprise-level companies. Instead of using third party-services, enterprises can create and regulate a system that is fully automized. Even more, the immutability of blockchains allows the companies to trust the network instead of themselves.

Blockchain Follows the Steps of the Internet

History tends to repeat itself. During the 1990s, a small part of the internet community worked on making the world wide web what it is today. Only ten years ago, a handful of cypherpunks, cryptocurrency enthusiasts, and miners paved the way for what the blockchain industry is today. At the time of writing, multiple IT giants and financial institutions adopted blockchain technology, including IBM, Microsoft, Amazon, Fidelity, JPMorgan Chase, and more.

However, blockchain technology is still at its infancy. We might be a decade away from seeing blockchain adopted in a significant fashion, comparable to modern banks and financial institutions.

Joseph Lubin, the founder of the Ethereum Foundation, made a forecast during last year’s Consensus conference, stating that we’ll have real blockchain applications serving real users within only five years.

Corporations may choose to adopt blockchain in order to remove inefficiencies commonly found in management, accounting, and payments. A significant amount of company resources are used for data analysis, accounting, and reporting. Besides operation costs, corporate entities also face the possibility of losing or missing tracking data when dealing with high-level clients due to the enormous size of the companies.

Blockchain application can significantly improve the entire process, but why would companies make essential business data available to the public? The truth is, they don’t need to.

Blockchain networks can be made into both public and private versions. While a public blockchain may be used to share product information transparently, private blockchains can be created for a set of enterprises who prefer to privately share business information, including transaction data, between themselves.

However, a fundamental problem for adoption persists, scalability. First and second-generation blockchains (Bitcoin and Ethereum, respectively) don’t scale well with modern demands. For example, the bitcoin blockchain can only support around seven transactions per second (TPS) on average. On the other hand, VISA handles 24,000 transactions per second, according to a test conducted with IBM in 2010.

When looking at the transactional throughput, the most well-known blockchain appear entirely useless for enterprise-level businesses. 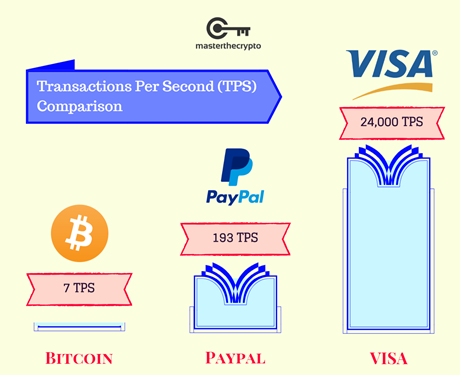 Among the wide range of protocols available, a standard is destined to rise in the upcoming years. With predictions coming from Cisco and Joseph Lubin, it is only a matter of years before blockchain is implemented in the same way the internet currently is. If the ingenuity of the internet made it possible for humanity to access an enormous amount of information, blockchain technology would make it possible to record and view fully verified information. If it were to succeed, we wouldn’t be living in the century of information, but in the century of trust.