BitcoinWarrior News and Education
Home news FUD Alert: Why is October 31 an important date for Bitcoin?

This is a time of turbulent economic conditions across the world and these conditions are reportedly influencing the price and demand for Bitcoin that has now been dubbed as a “safe haven” asset by many. An upcoming political event that is likely to be of consequence for Bitcoin is the Brexit.

Nov 1 might be a possible bank holiday in the UK

UK government officials are predicting that the event is likely to trigger “financial chaos” across the country. Government minister Michael Gove is of the opinion that the day after the Brexit deadline, Nov 1, should be declared a bank holiday. He said –

“I don’t know if this is a good idea at all. Tell me if it isn’t. What about a bank holiday?”

If the bank holiday is approved, all the financial markets will be shut down for 24hours. The proposal to have a 24-hour bank holiday comes as measure for mitigating financial chaos in the country in case Britain doesn’t get a deal from the EU. Speculations of Brexit getting a “no deal”, despite Prime Minister Boris Johnson describing the chance of a no-deal Brexit as “vanishingly small”, are rife.

The Struggle For Stability And How Bitcoin Will Play The Messiah

The predicted impending “financial chaos” is likely to create turbulence among the prices of two major fiat currencies – GBP and euros, and therefore, crypto analysts are urging investors to buy Bitcoin now.

According to a cryptocurrency analyst on Twitter, Bitcoin will help people mitigate risks in case there is a bank run. 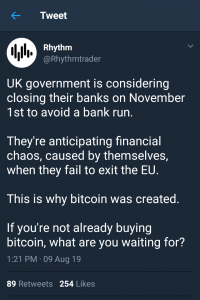 Nicholas Gregory, CEO of blockchain firm CommerceBlock, is of the opinion that in the event of a no-deal Brexit, Bitcoin price may hit record highs. He says,

“Bitcoin has rediscovered its mojo this year with multiple mini surges but a no-deal Brexit could see a massive and unprecedented breakout.”

A Twitter user also pointed out to other interesting developments happening in the UK that may lead to a price rise for Bitcoin. According to DREAMiners, a GBP stable coin listing on Binance Jersey and Robinhood’s entry into the UK as a broker are good signs for Bitcoin’s momentum. 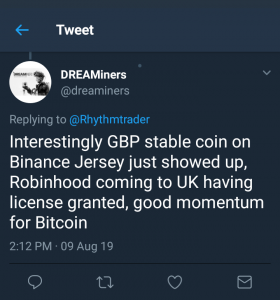 Important dates in the past with reference to Brexit have also coincided with high volatility in the price of Bitcoin, which indicates that there might be a correlation between the two after all. In June 2016, at the time of UK public’s vote on Brexit, Bitcoin had moved from $527 on June 1 to $584 on June 23 on the day of UK public vote on Brexit, after peaking at $775 just a few days before the event. In March 2017, a letter from the UK had been handed to the President of the European Council to invoke Article 50, initiating a two-year process with the UK due to leave the EU. At that time Bitcoin had seen a sharp dip in price a few days before the announcement before it began rising again and reached $1060 on March 29 from $905 on March 25.

Now, what remains to be seen is how Bitcoin will behave around October 31, 2019.

What are your views on the kind of impact that Brexit will have on Bitcoin. Please share with us.

The post FUD Alert: Why is October 31 an important date for Bitcoin? appeared first on Coingape.