Popularly known as “gold bug”, Peter Schiff, engaged with renowned bitcoin enthusiast, Anthony Pompliano in a series of arguments on twitter in which both are planning to place the “golden bet of the decade” in order to support their respective choices of assets, gold and bitcoin.

Minus 50% Bitcoin Price Still Outperforms Many Other Assets

In the events leading to leading to the pronouncement of $100k worth of gold and bitcoin as the stake, Pomp had stated that even if bitcoin dipped by 50%, it would still be outperforming many other assets. According to Pomp,

Bitcoin Crashing Further, Minus 50% Is Understatement

Responding to Pomp’s confident tweet, Schiff said that while Pomp’s statement was true at the 50% mark of the dip, Bitcoin’s decline was going to be much greater than 50%. Further expressing his confidence about his prediction, Schiff added that bitcoin was going to be the worst performing asset within the next 10 years. This was where the proposal for staking $100k came into play. 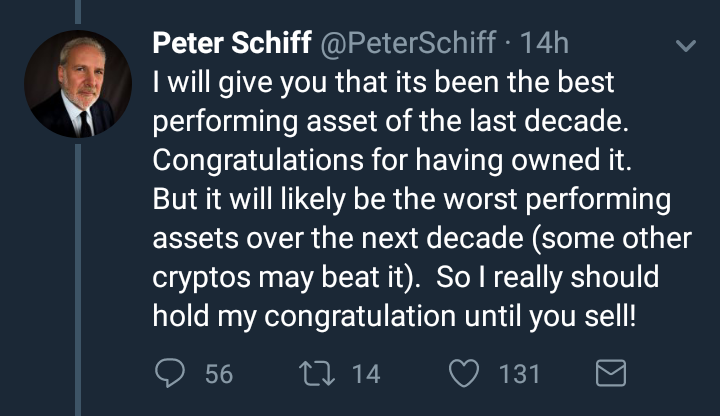 Pomp replied by suggesting that both men put $100k each (in the form of gold and bitcoin) in escrow for 10 years. The asset which performs better, in terms of Returns On Investments (ROI) at the end of the period wins the bet in a winner takes all arrangement. Schiff has not responded if he is in for the bet.

On the other side, Anthony Pompliano, who recently got the alias “bitcoin bug” is the co-founder and partner at Morgan Creek Digital, an establishment which provides asset management services. Pomp, as he is popularly known, appears on podcasts and interviews and talks about matters related to Bitcoin. He has established himself as a reputable bitcoin influencer in the cryptocurrency space.

The duo also recently debated which asset class was a better choice on CNBC in a stalemate argument which left spectators on both sides with expectations of another session.

The post Bitcoin vs Gold: Pomp and Schiff Plan to Bet $100k Each to Determine Which Asset Class is Better appeared first on Coingape.