Bitcoin continues to drag altcoins into the ‘crypt’. Following the drop from the former consolidation range above $11,200, BTC/USD has been unable to make headway above $10,000. The recent plunge failed to find support at $10,000 and $9,500 respectively. However, the price hit a low at $9,480 (on Coinbase) giving way for a shallow recovery.

The four-hour chart displays an asset that is yearning for a breather due to the immense selling activity. The short-lived recovery yesterday stepped above $10,400. Unfortunately, the diminishing buying power left a gap currently being explored by the bears. 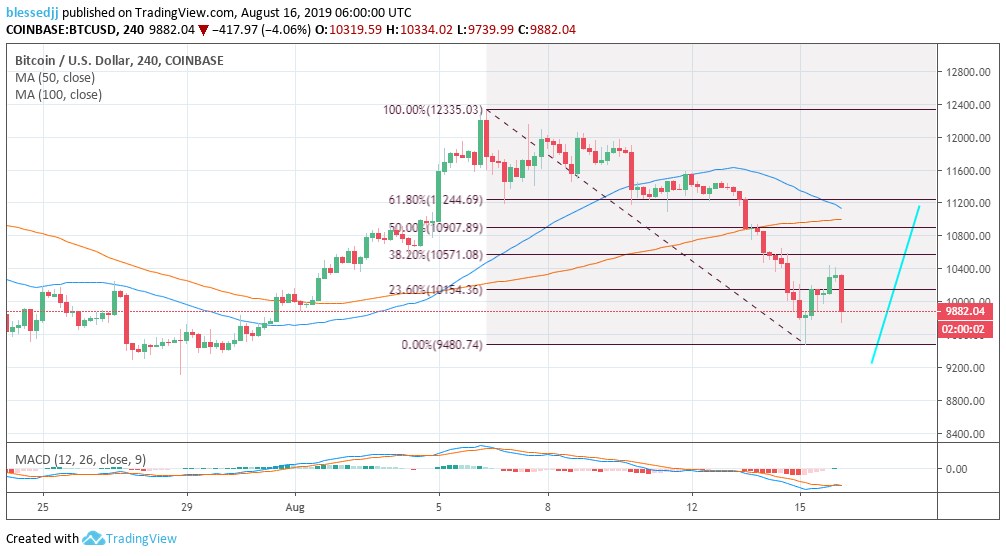 Bitcoin currently exchanges hands below the 23.6% Fib retracement level taken between the last drop from $12,335.03 to a low of $9,480. While several technical indicators are sending bullish signals, it is likely that Bitcoin will slide lower before a bottom is found.

The Moving Average Convergence Divergence stands at a slightly higher level compared to yesterday. Although leveling at -328, the MACD has a slightly positive divergence which signals existing buying power. At the same time, as long as the 50 Simple Moving Average (SMA) stays above the longer term 100 SMA, Bitcoin will have a greater potential to reverse the trend.

If the support in the zone between $9,480 and $9,500 fails to hold, BTC/USD could breakdown further. A slide to $9,200 will see fresh interest arise from the investors. More buying entries will sustain recovery above $10,000. Besides, Bitcoin requires a catalyst to rise above the resistance at $11,200 and assault levels around $12,000.

MACD: Leveling motion suggests the beginning of ranging prices before a breakout.

The post Bitcoin (BTC) Flashing Buy Signals but $9,200 Will Have to Be Tested First appeared first on Coingape.