With Bitcoin [BTC] dropping below $8,000 on the back of a massive 7 percent pullback in five hours, the collective market felt the embers of a bearish flame. A major market correction ensued on the eve of June 4, shaving over $20 billion from the overall market cap, with the altcoins which looked to go toe-to-toe with the king coin dropping massively.

The market plummet was led by the three conjoined virtual currencies which have been trading more or less in tandem since the beginning of the year, Bitcoin Cash [BCH], EOS [EOS], and Litecoin [LTC]. Ranked 4th, 5th, and 6th respectively, the three cryptos faced, on average, a 10 percent decline in their individual prices as yet another shuffle saw EOS drop below Litecoin. 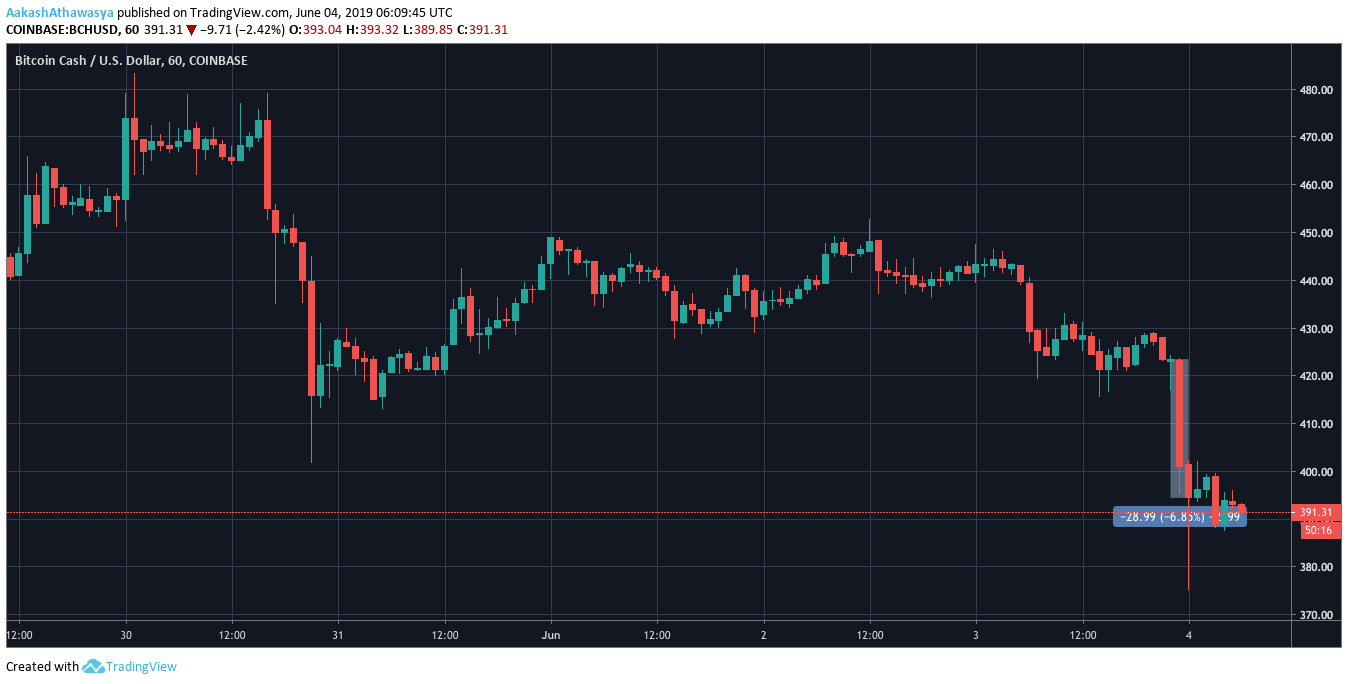 The cryptocurrency, infamous for vying to be the real Bitcoin and from a price context, pegged as the trigger for the November 2018 market meltdown owing to its hardfork, at press time, was trading at a 10.11 percent decline against the US dollar. Since 31 May, the cryptocurrency held strong at the $440 mark with the BTC correction bears attacking the market at 0500 UTC on June 3.  The price steadily declined to $425 by midnight on the same day, after which a major drop was witnessed. Bitcoin Cash then dropped by 8.71 percent in two hours to reach $388, its lowest price since 23 May.

Bitcoin Cash had over $550 million valuation lead over Litecoin, with a market cap of just over $7 billion. However, this current downtrend shaved over $900 million from the BCH market cap. OEX recorded the highest BCH volume with 11.84 percent of the global volume via the pair BCH/USDT. Other notable exchanges on the list were CoinBene, OKEx, and Huobi Global. The highest ranking exchange with “real volume” was Binance on the 14th spot, accounting for 1.97 percent of BCH trade.

This period saw Litecoin’s market capitalization drop by over $600 million from $7.1 billion to below $6.6 billion, however, due to the rumor mill correction hitting EOS harder than digital silver, LTC managed to surge over EOS and the gap between the two, at press time, was $300 million. Little-known Coineal accounted for the highest LTC volume, taking 11.03 percent of the total via the pair LTC/BTC. In terms of “real exchange,” 28th ranked Binance took the top spot with 1.24 percent LTC trade volume.

Leading up to the Block.One event on June 1 and the anticipation of a major announcement, EOS’s price shot up by 17.06 percent, owing to the “rumors”. Once the announcements of EOS integrating with Coinbase Earn and Block.One’s Voice, a social media platform actually surfaced, the price dropped by 22.44 percent, owing to the “news”. At press time, the cryptocurrency was down by 11.01 percent against the dollar and was the worst performer in the top-10.

Between the five hour window mentioned above, EOS lost over 8 percent of its price, dropping from $7.31 to $6.62. BTC correction and its own correction saw the cryptocurrencies overall market cap decline by over $1.6 billion, so much so that LTC, despite dropping by over 10 percent, overtook EOS on the global chart to take the 5th spot. The market cap of the now sixth largest cryptocurrency was $6.12 billion. ZB.com, Huobi Global and OKEx took the top-three spots in EOS volume. The highest ranking “real exchange” was 9th placed Binance.

Other notable losers in the market were XRP, Tron [TRX], Cardano [ADA] and Stellar Lumens [XLM].