With crypto spring finally coming after a long crypto winter, it’s time to recall (and to some, perhaps, to find out) the best places to trade cryptocurrencies. Let’s take a brief look at the top five cryptocurrency exchanges, learn about their advantages and disadvantages, the problems they face, and the solutions to those problems.

At just over two years old, Binance is relatively young – but it is one of the most popular and actively developing cryptocurrency exchanges in the world. Its founder, Changpeng Zhao, prioritized a combination of speed and reliability, and did not lose. During the first six months of work, the new project confidently took its place among the leading exchange sites.

Binance is attractive primarily for its low interest on transactions (only 0.1%) and withdrawal of funds, as well as the absence of fees on deposits. Also, its significant advantage is the large volume of transactions and the proposed trading pairs at a fairly high speed of operations. Binance clients have plenty to choose from and don’t have to wait long, which makes it popular both for beginners and professionals.

As well as having its own digital coin known as Binance Coin (BNB), the exchange offers a large number of currencies – more than 130.

In addition, Binance has applications not only for mobile platforms (both iOS and Android), but also for desktops (Mac OS and Windows), which makes cryptocurrency trading easier and more efficient.

The exchange supports multiple languages, which can be seen as both positive and negative. On the one hand, by having the interface in several dozen languages, Binance becomes available to more people around the world. But on the other, translation into other languages ​​is often so weak and incomplete that it regularly becomes a source of negative feedback.

The complicated procedure of account verification is among the shortcomings of Binance (according to user feedback), with significant limitations reported by those who fail to pass it. What’s more, the exchange supports neither the exchange of cryptocurrencies for fiat money nor fiat withdrawals – another significant weakness.

Direct exchange of the euro for BTC and pound sterling for ETH is included in the company’s management plans, and the launch of Binance Jersey has already been announced but not yet implemented. Moreover, the stock exchange recently announced plans to launch margin trading.

Just a few weeks ago, in early May 2019, Binance underwent a massive hacker attack during which over $40 million worth of cryptocurrency was stolen from the exchange’s hot wallet. This once again vividly demonstrated one of the main problems of crypto exchanges: the need to protect customers’ funds and bear responsibility for their security.

– No exchange / withdrawal of fiat

The Coinbase exchange was founded in 2012 and regularly sets records for number of clients. As well as being one of the first launched exchange platforms, it is known for its reliability and scrupulous attitude to security and privacy. How does this manifest itself in practice? In a profound user verification system, individual assets insurance and much more.

The main feature of Coinbase is that it sells cryptocurrencies directly, based on their market value. This makes Coinbase faster than its competitors, and also allows the use of bank transfers. In other words, it is possible to buy BTC immediately after a KYC check is complete.

Reasonable fees are also welcome features of this trading platform: the percentage depends on the monthly trading volume, and there is no fee for a transaction initiator.

Coinbase allows you not only to trade cryptocurrencies, but also to keep money in a virtual electronic wallet. The company has its own mobile application.

Its obvious disadvantages, meanwhile, include a limited number of countries allowed to trade, and a limited number of cryptocurrencies (all for regulatory reasons). The service works only in 33 countries; for other users, after registration one can only deposit funds and transfer them to addresses of third parties.

Lastly, the system supports only the most popular currencies: BTC, Litecoin and Ethereum.

– BTC can be bought simply and quickly immediately after registration

– Works in a small number of countries

– Works with a small number of currencies

Bittrex is a secure and easy-to-use US-based exchange platform. It can certainly be attributed as one of the oldest and most reliable of its kind. At least for now (first half of 2019), Bittrex was never hacked.

The trading platform allows one to trade more than 190 cryptocurrencies, and supports both widespread and new, not yet popular assets. Another significant advantage of Bittrex is the relatively low transaction fee -– just 0.25%.

Despite all its weighty advantages, Bittrex has one major drawback: although it supports a considerable number of pairs, only Bitcoin can be withdrawn into dollars. It turns out that if a user needs to exchange, let’s say, ETH for USD, then he or she will have to first convert it to BTC, and only then convert it into dollars. So, a part of the money is lost on the additional exchange fee.

Also, margin trading is not available on Bittrex. The user interface gets mixed reviews: it is referred to as both the “easiest and most understandable” and “extremely inconvenient”.

– A large number of currencies

Huobi is a cryptocurrency exchange platform based in China. It claims to support more than 250 digital currencies, and is known for its high data security. It holds the third place in the world in terms of total trading volume (more than $ 518 billion per day, according to CoinMarketCap).

In October 2017, Huobi, like many other Chinese exchanges, was forced to close due to China’s tightened policy against digital currencies. It was re-launched in March 2019, but under the name of Huobi.pro.

This is what makes Huobi unique: the possibility to work in two different versions. With Huobi OTC, users are allowed to trade a limited number of assets but with zero commission. The Huobi Pro version, on the other hand, benefits from enhanced cryptocurrency trading capabilities.

The key advantages of this exchange, therefore, are security and trading volumes, as well as support of multiple languages (thirteen world languages ​​with almost error-free translation), margin trading, mobile applications with full trading functionality for iOS, Android, Windows and Mac, reasonable trading fees, the ability to trade without verifying a personal account.

The disadvantages include a complex verification process, which is still required for the user to gain access to all platform features, periodic restrictions on transactions with fiat, the shortage of currencies for margin trading, and possible further pressure from the Chinese government on the development of the crypto space. In addition, many sections of the site are still available only in Chinese.

– Own application for all major operating systems (including mobile)

– One can trade without verification

– Influence of the Chinese government on further development

The Kraken platform is certainly one of the largest cryptocurrency exchanges. Registered in 2011 in San Francisco, today Kraken is a fairly popular marketplace, with plenty of positive feedback from traders in different countries.

Firstly, it is known for the fact that the the trading fee is just 0.2% and decreases with an increase in the account’s trading volume. Reasonable fees are attractive for many beginners, as well as for experienced traders around the world. Kraken ranks second among all major exchanges in terms of daily trading volume. This is a significant advantage comparing to the average volume of exchanges, as it offers a larger number of trading pairs. Kraken offers margin trading and its own fairly convenient application – only for iOS, however.

The site supports English and Japanese only, and is not yet available in other languages. The Kraken website is hardly simple and convenient: it takes some time to get into all the nuances of the interface.

The disadvantages of this exchange include the fact that it supports trading with only two dozen digital currencies.

– Own application (iOS only)

The problem with all crypto exchanges and the solution

As you can see, there is no ideal exchange even among the best options: each has its own advantages and disadvantages, while all have common problems. The main ones are:

Is it possible to solve these problems? One of the solutions is proposed by the
GEO Protocol project, an open-source technology whose goal is to integrate the world of cryptocurrencies into the universe of traditional finance.

What exactly does this solution offer? Only the creation of a global decentralized network built on free open source technology, to which cryptocurrency exchanges, market makers and other liquidity providers, custodian services, OTC platforms, cryptocurrency and fiat exchangers, brokers, banks and other financial organizations, etc could be freely connected. 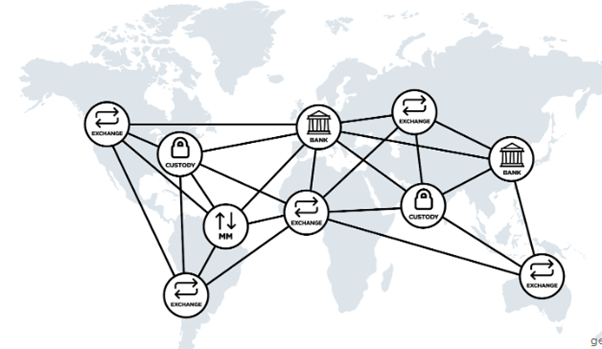 As a result, we get a network with common global liquidity and the opportunity for all participants to interact with any other network participants, improving the execution of transactions.

Each participant automatically and instantly gains access to any blockchain asset that is already available on the GEO network, thus eliminating the need to integrate full nodes or wallets of new blockchains.

Thanks to the financial institutions and custodian services available on the network, there is the possibility of interaction with several fiat currencies, and there is also no need to keep clients’ funds in them and take responsibility for this.

Fast and secure transactions with multiple assets make it possible to arbitrate with other exchanges available on the public network.