Tron’s BitTorrent [BTT] saw the announcement of its BitTorrent File System [BTFS] on May 30, however, this did not lead to any major changes in the BitTorrent Ecosystem. Following the BTFS announcement, Misha Lederman, a prominent proponent had stated that BitTorrent Speed will also see the launch soon.

According to a press release, Justin Sun the CEO of BitTorrent and Tron had stated that:

“With BitTorrent Speed, we aim to strengthen the BitTorrent protocol and then deliver more features that inspire innovation across industries.”

BitTorrent announced that it sent out invitations to a few people via email to access BitTorrent Speed. One of the Twitter user @_theperfesser reviewed BitTorrent speed for the fellow BitTorrent users. The user informed that as they registered for the early access and answered a few UI questions about the app, BitTorrent let them download the app and seed 3 torrents. The user continued:

“Been seeding them since yesterday and so far there are no BTT earnings showing, but they are seeding quite slowly. Double digit KB/s and I’m on a 77Mbps connection (up and down). Likely just aren’t files that anyone wants to download except those in the early access lol”

However, the user said emphasized more on the questions asked by the application with regards to its UI and said that “maybe the earning part was not working yet”. BitTorrent Speed rewards BTT users with BTT tokens in exchange for seeding and bandwidth, that would help them with faster download speed.

When another user asked about how much BTT one can earn and under what settings, @_theperfesser said that there was no provision of settings in the app yet. They further explained:

“Just a button that opens this dashboard in the screen shot. I seeded about 50GB worth of data and no data showed for the “my earn for seeding today” or “…over 5 days” fields. Not part of this version, I presume.”

After conducting a speed test to download a 1.06GB file that was provided by BitTorrent to find out that the test without Speed was slightly faster. However,  @_theperfesser noted that:

“these speeds did not coincide with the seemingly random speed figures shown in the dashboard. This is consistent with my assumption that this test version was UI focused and that maybe the Dashboard is just simulating the functionality for UX testing purposes.” 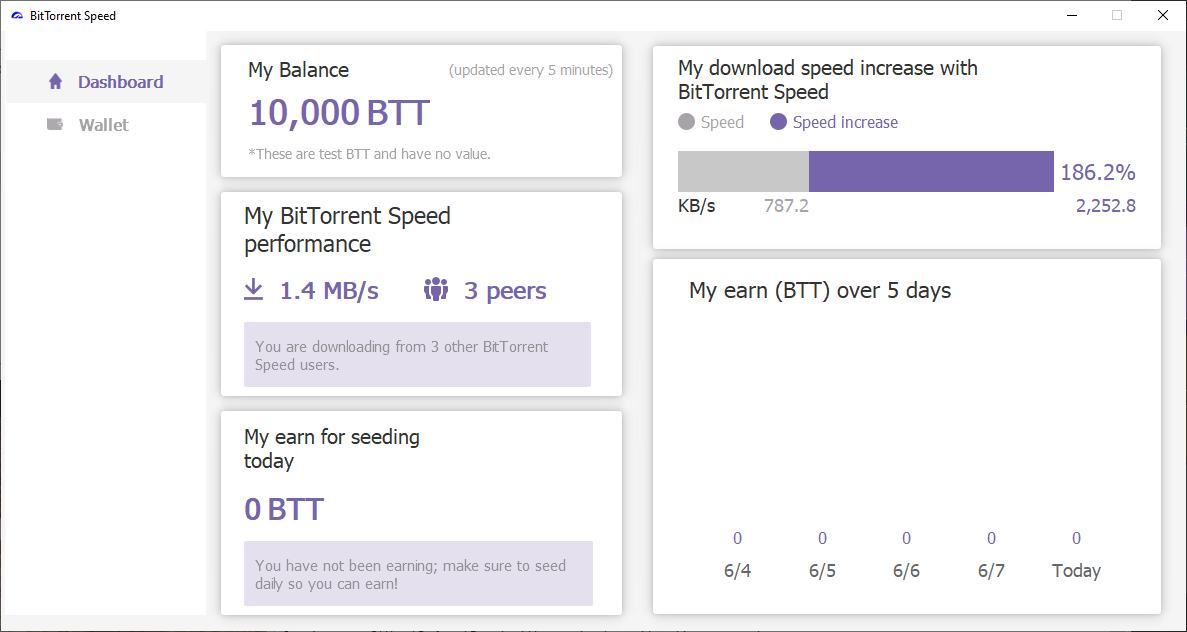 The users appeared unclear about how exactly they would be able to earn BTT within the application. BitTorrent might have to consider noting these doubts and clarifying before the official release.

The post BitTorrent’s early access to BitTorrent Speed leaves users with questions about rewards within app appeared first on AMBCrypto.