Bitfinex, one of the world’s most controversial exchanges post the Tether-NYAG fiasco, has made a comeback in the news following an update on the Bitcoins stolen from the exchange during a hack.

Earlier today, Whale Alert, a Twitter handle that tracks large crypto-movements for most leading coins, notified five transactions that were made from the stolen Bitfinex address. The five transactions accounted for around 172.574 Bitcoins, worth $1364600 [$1.3 million] at the time of the transaction.

Notably, the exchange has been a victim of security breach twice, with one hack taking place in 2015 and another one in 2016. The exchange lost around 1500 BTCs to the first hack and 119,756 Bitcoins to the second attack. The funds that were transferred earlier today belonged to the second hack.

Further, this was not the first time the attacker moved the stolen Bitcoins this year. In April 2019, the hacker moved around 550 Bitcoins from addresses that were connected to the 2016 hack. 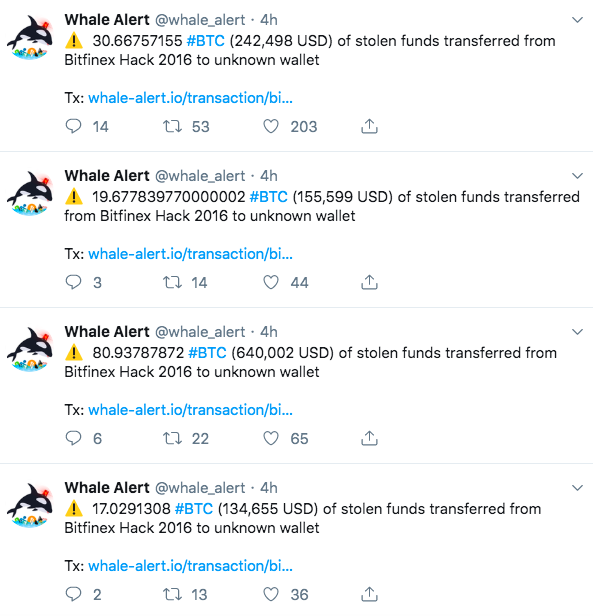 “I do wonder what the market is like for buying/accepting stolen and tagged coins, how much discount would you get for them? What’s the market rate? Is it kind of like stolen credit card info? ‘I just got the best deal of my life, I managed to buy 172 $BTC at a 20% discount.”

“You could of course mix them, but that would come with other issues and to mix a huge amount of them takes a very long time.”

“You can never be sure if these ‘hacks’ were real or staged.”