Bitcoin has been one of the standout performers of 2019, outperforming several traditional commodities. However, the virtual asset is often criticized for its price volatility and a higher risk of investment. Despite its critics, while the stock market’s market cap was up by 12 percent in 2019, Bitcoin recorded a massive 111 percent growth. 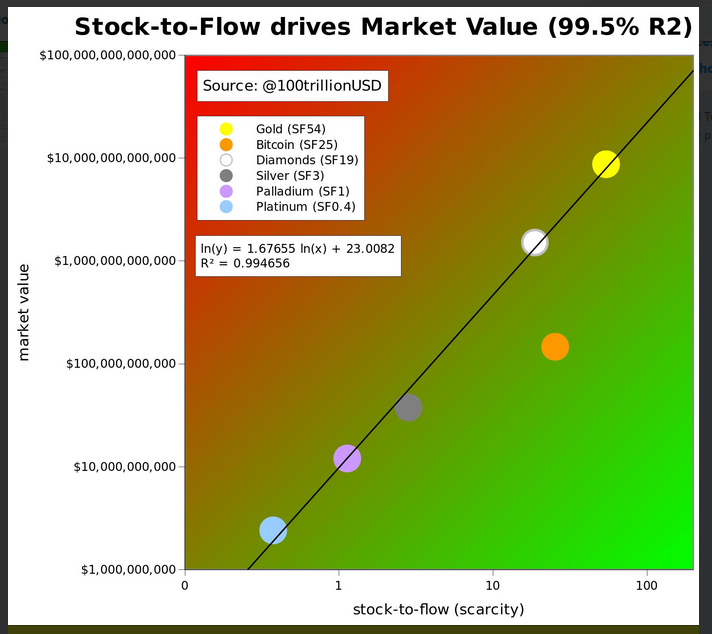 According to the chart, it can be seen that Silver, Palladium, and Platinum had a significantly lower stock value than Gold. However, it did not indicate a higher value for any of the other aforementioned assets. The statistics stated that Gold has a 54X stock to flow ratio, implying that gold producers could not cause inflation of stocks. At press time, Bitcoin was on a similar economic standpoint as Gold, since both of them had suggested monetary value.

The comparison gathered the attention of the community and Twitter user @bernardtan4 stated,

“Does that mean btc should be valued more than diamond at this moment… Greater than 1 trillion dollars?”

“Yes, I would not be surprised if bitcoin market cap grows to $1trn, but now btc seems undervalued because new, digital and with lots of regulatory and technological risks etc.”

In a recent analysis, it was also recorded that the digital currency had surpassed the utility asset domain of Platinum, Palladium, and Silver and was currently competing to enter the monetary asset value of Gold. At press time, Gold held the top position on the market value chart, with a market value of nearly $10 trillion, with Bitcoin clocking around $144 billion.