Bitcoin’s price hit a Year-to-Date [YTD] all-time high on May 30, when it momentarily breached $9000, however, the surge wasn’t sustainable as it fell down to $8,600. This roller coaster ride caused millions of liquidations for both longs and shorts.

The mining difficulty, however, also reached an all-time high as of May 31, 2019. The new mining difficulty reached 7.46 T, which is a new high for the Bitcoin network, as compared to the old high at 7.45 T. 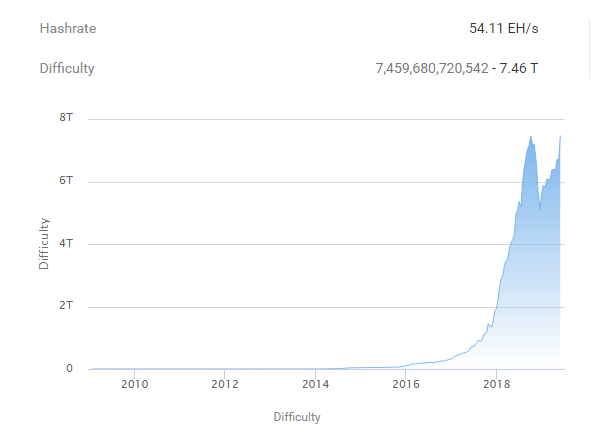 The difficulty of Bitcoin increased by a massive 11.26% with block 578,592, which is staggering compared to the increase in previous blocks.

The hash rate of Bitcoin has also been on a steady rise since December 2018, when the hash rate reached a very low level due to the dip in Bitcoin’s price. However, at press time, the hash rate for Bitcoin reached ~58 TH/s, 2 TH/s away from reaching an all-time high.

The combined increase in the hash rate and miners is a reason for the increase in the difficulty of Bitcoin. The mempool size for Bitcoin has decreased considerably over the years and in particular, has a sharp decline as of today.

The post Bitcoin difficulty reaches all-time high after increasing by 11.26% as of block 578,592 appeared first on AMBCrypto.