While the common universe may be unfamiliar with crypto’s uncertain market and its ongoing scams and controversies, players within the industry are aware of the role whale trading plays in changing market dimensions. In fact, specialists of the STIPS|Oculus platform identified 38 questionable transactions that are valued at over 50,000 BTC in 2019 alone.

Source: MediumThe chart above pictured a surprising discovery. Considering the reading over the past 5.5 months, it was uncovered that 29 out of the 38 transactions were performed over a 3 week period (between May 16 to June 7). It is important to note that during the period of active growth that began on April 1, small transactions were made on the Bittrex’s cold wallet.

What comes as a surprise is that on May 30, the first major transfers were recorded using the mixing system (that is, dilution of a large amount into smaller ones and their gradual accumulation on a single wallet). The report read,

“The specialists managed to find out that starting from the 3AweAnU1qYSUCJ5Hvy9DFEB7dVqUebZw5i wallet and the amount of 107,432 BTC over the past week, some small amounts up to 500 BTC were transferred to a hot BINANCE wallet, and large amounts, minus these 500, went to the next wallet, where the operation repeated again and again.”

A similar system was used to make a transfer of 7,000 BTC to the hot BINANCE wallet on the same day as when BTC dropped from $9000 to $8000 in trading value. However, considering the current price of Bitcoin [BTC], the people responsible for the whale transfers chose the best time for fixing a certain amount of BTC. Further, the BTC market may not be able to recover back to the $9000 mark, unless there is a reduction in whale trading. 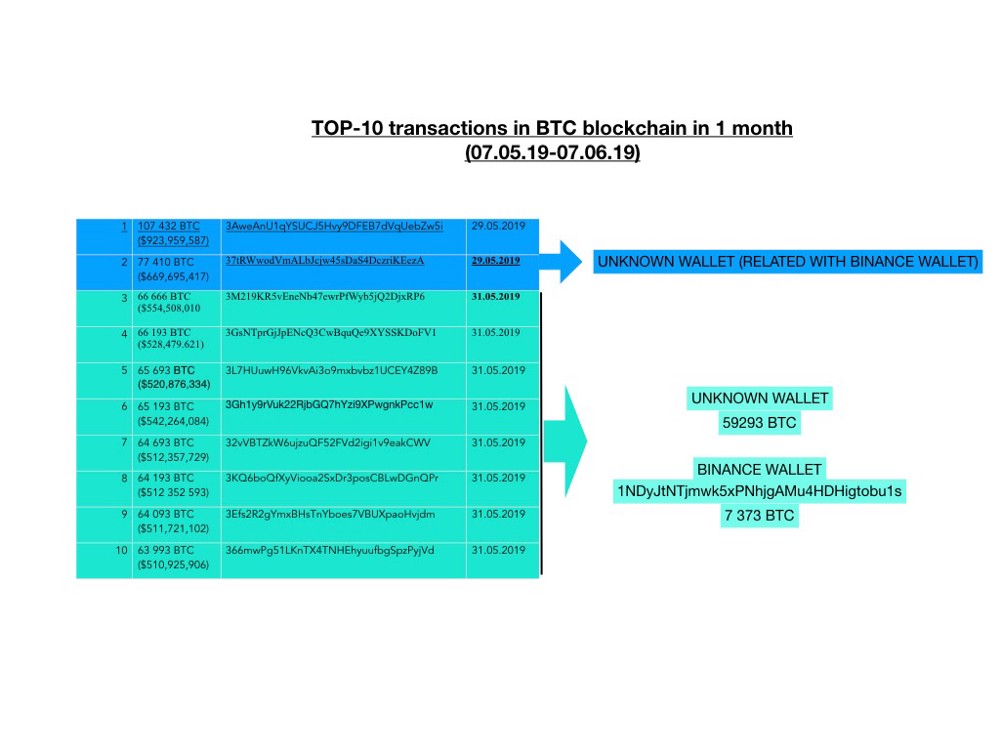 Supporting the previous speculation, the above chart shows that the top 2 transactions in the BTC blockchain were linked to Binance. Although there is no way to perfectly predict the highly volatile market, it is advisable to hold funds until the pressure on the prices weakens owing to a reduction in ongoing whale trading.