Since the beginning of 2019, Bitcoin and the collective crypto-market have been on a roll as the virtual asset ecosystem saw a major change in fortunes after suffering a grueling crypto-winter.

Bitcoin [BTC] has been one of the top performers among all crypto-assets and according to data, the largest virtual currency has also dominated the likes of Nasdaq and commodities from an economic standpoint.

One of the prominent investment indexes that Bitcoin outperformed was S&P 500, which was up by around 10% in 2019, at press time.

That is staggering progress in terms of growth. However, critics of cryptocurrencies remain skeptical of the long-term scenario regarding crypto-assets.

According to statistics released by Twitter user planB, it was noted that Bitcoin had significantly out-performed S&P 500, in terms of long-term returns and risk attained. 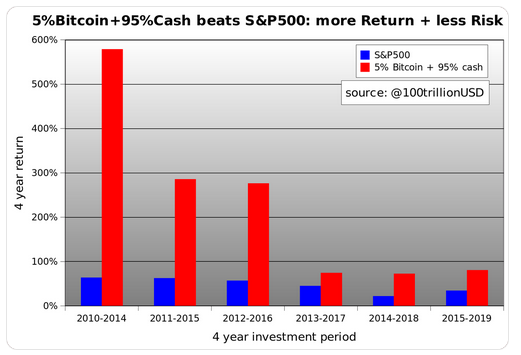 The data contradicted the usual facade surrounding cryptos, which indicated that long-term investment in virtual assets was not beneficial.

In May, Gold had returns of just about 2 percent and commodities like Oil suffered negative returns. S&P 500 also suffered devaluation in May, which was around -17 percent.

It was previously reported by AMBCrypto that the Yen-Dollar, which was one of the best performing traditional assets in the market, only exhibited 3 percent hike against Bitcoin’s massive hike of 55.67% in May.

The post Bitcoin [BTC] outperforms S&P 500 in terms of ‘returns and less risk’ in long-term appeared first on AMBCrypto.