There was a sudden shock, confusion, and fear in the Crypto Twitter community as Binance website became inactive with no trades for over 20 minutes. Some members of the community report that there are no trades shown on the UI when users log in.

The Binance team after about half an hour of silence has made an announcement that it is on temporary system maintenance that could last for three hours or more. According to the team, the system automatically shut down after detecting a disk failure to avoid any data loss or corruption. Users funds are completely safe according to the update

However, all deposits, withdrawals, and trading are suspending during this time and uncompleted deposits will be completed when the maintenance is complete. The maintenance started by 20:00 UTC and the team promises to keep the community updated on progress.

Everything is back to normal

Binance suffered a hack in May that led to the loss of over $40 million of users’ money. An investigation is still ongoing as to how the hack happened and ways to improve security to avoid such loss in the future. Some Twitter users who are likely Binance customers expressed fears of a possible hack. Some of the responses are as follows:

A follow-up announcement, however, confirms that the system is back on and no data was lost. Also as promised, no funds lost so the panic can be over finally. 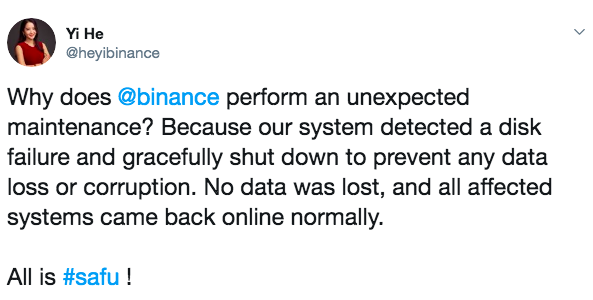 The post Binance Goes on Temporary System Maintenance With No Trading Activities appeared first on Coingape.