Binance, the largest and most reputed cryptocurrency exchange in the world, is considered part of the ‘old guard’ of digital assets by some. However, this couldn’t be further from the truth.

As detailed by The Block, Binance, in its short two-year career, has gone from a nobody in the cryptocurrency world to a kingmaker, with a slew of regulatory conundrums playing their part as well. Over the same time period, top exchanges like Poloniex, Kraken, Bittrex among others, have been dealt a blow as the CZ-led exchange has eaten up much of their volume, owing to a number of key developments on several fronts. 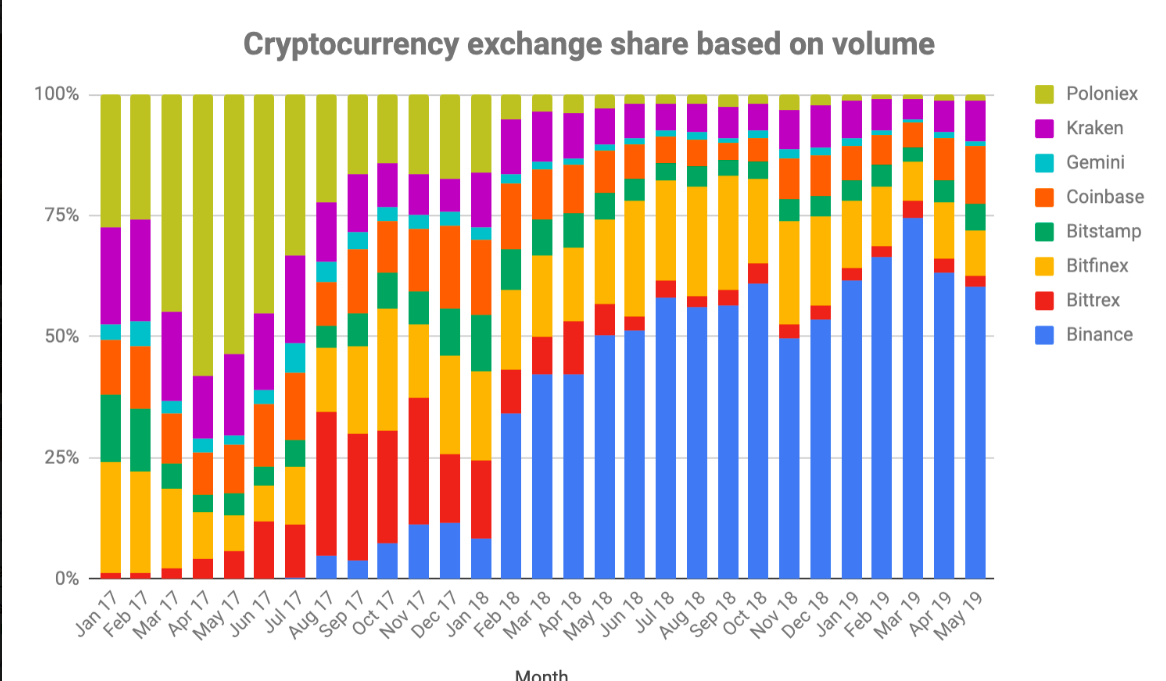 By the close of 2017, Binance had accumulated over 10 percent of the cryptocurrency market volume, as prices soared to unimaginable heights on the back of the CME, CBOE futures announcements. Interestingly, as the prices began to freefall, Binance exchange’s volume skyrocketed, touching 50 percent for the first time in May 2018.

The exchange broke the half-way point the following month, with the same sustaining itself till November 2018. As the Bitcoin Cash [BCH]-induced bulls dragged the market down, the next four months saw continuous month-on-month growth, reaching its apex in March 2019. Here, Binance was on the verge of holding three-fourths of the total exchange volume, a contentious issue for the cryptocurrency community.

In addition to capturing more than a majority of the volume within the market, this period also saw Binance launching their own token, Binance Coin [BNB] and their native blockchain Binance Chain and a token launch platform, Binance Launchpad. However, all is not perfect for the exchange, as it has been hopping from country to country to seek friendly regulations. It is currently operating out of Malta, and a recent $40 million Bitcoin hack reflected on its May 2019 volume dropping.

While Binance was making strides in the market, the exchanges which once held the gauntlet were slowing leaving the arena. Most notably, Poloniex lost the biggest market share. In April and May 2017, Poloniex held over 50 percent of the total volume. However, it dropped to around 25 percent by October 2017, despite the market in full flow.

By February 2018, Poloniex’s market share had dwindled to less than 10 percent following a massive freefall, which the exchange is yet to recover from. Coinbase has seen its market share go back to February 2018 levels of around 25 percent. It must be noted that at the beginning of 2019, the San Francisco-based exchange’s volume dropped significantly due to several reasons, which were encapsulated in a community cry to #Delete Coinbase.

The controversy-riddled exchange, Bitfinex, which was involved in a “fraud,” in the New York Attorney General’s words, held strong and is behind Coinbase as the third most dominant exchange in the space, with Kraken following suit.