Binance and Coinbase’s success and popularity, arguably the two most important cryptocurrency exchanges in the world, can be gauged using a metric that measures the amount of people they draw in. In the face of scams and questions of ‘real’ trading volume, such metrics are welcome an as recent estimates go, their “real” effect is working.

Kevin Rooke, a cryptocurrency analyst, charted out the site-visits to both Binance and Coinbase and attested that their figures for May 2019 were higher than any other cryptocurrency exchange this year. With Bitcoin and the larger cryptocurrency community soaring, traffic would be pushed, but to see that these exchanges took the lion’s share of the same points to a movement towards exchanges with “real” volume.

Binance, the Maltese exchange, took the top spot with over 1.37 million visits in a single day, with the month-on-month metric up by 16 percent in May 2019. Similarly, Coinbase saw 1.14 million visits a day, with a higher relative increase of 23 percent from April 2019. Rooke further added that no other cryptocurrency exchange saw over 500K visits a day.

Site traffic to Binance and Coinbase hit new 2019 highs in May.

No other crypto exchange gets more than 500K visits/day. pic.twitter.com/a1e29qblxA 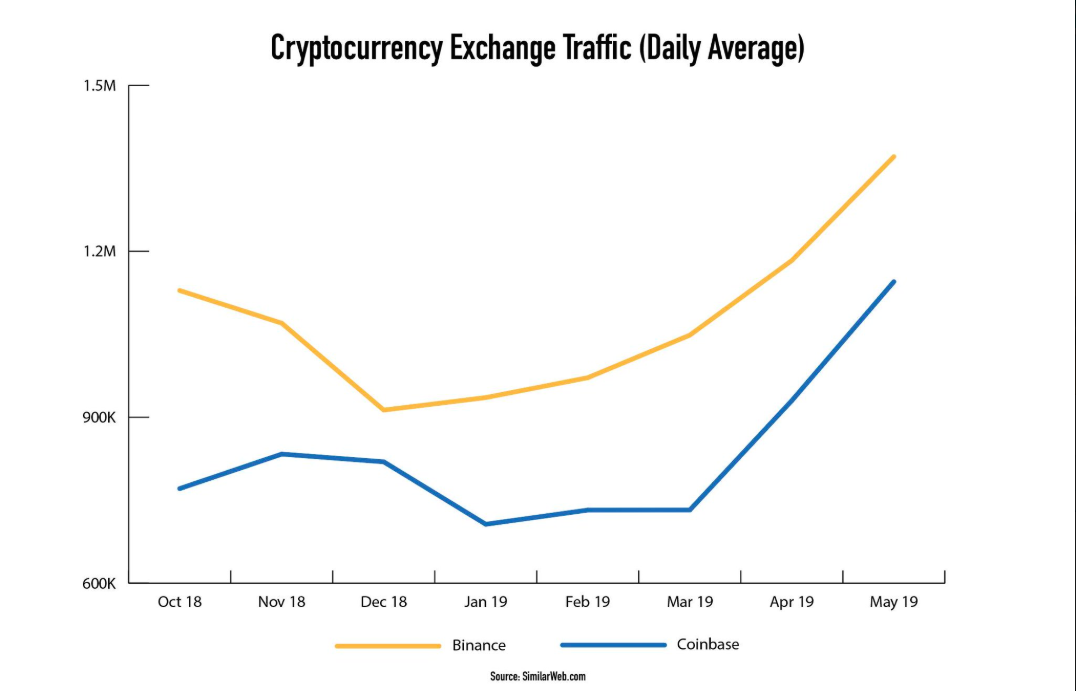 From the chart, it can be seen that as prices began to float up in March, prior to the massive April ascendance, site-visits responded. Coinbase’s daily average traffic was well under 500K in mid-March and then rose over 900K as Bitcoin climbed over $5,000 in early April.

Prior to the ascendance, Binance saw traffic of over 900K and the same rose over 1.2 million as the price soared in April. Despite a gulf in traffic difference between the two exchanges in March, the same has narrowed as the price rose in May.

Binance and Coinbase were two among the ten exchanges which reported “real volume,” and hence, were “real exchanges.” Other reports by The Tie group also vouched for these exchange’s volume credibility.

With reported volume a clear no-no in terms of discerning the true performance of an exchange, other crypto data aggregators decided to employ the parameter of website traffic. CoinGecko, a coin and exchanges data aggregator, launched “Trust Score,” which will rank exchanges based on web traffic data, order book data as well as reported volume.

CoinGecko will use web traffic data from Similar Web as it is “much more difficult to fake web traffic statistics aggregated by 3rd party services.”