Keeping aside the market growth and price hike of Bitcoin and Altcoins in 2019, the virtual asset industry had suffered a few major implications in the current year. Crypto exchanges are very important to the long term stability and rapid expansion of crypto assets however, the longevity of these organizations has come under question in recent times. 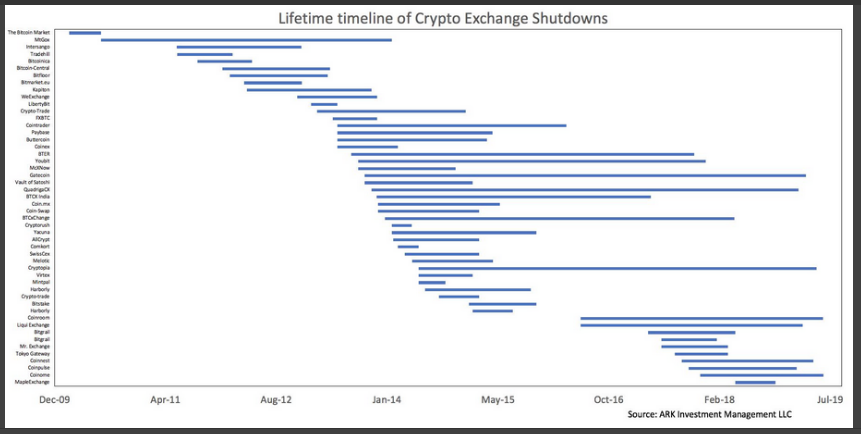 From a recent statistics released by Yassine Elmandjra, a cryptoanalyst at ARKinvest, it was observed that the average lifespan of a cryptocurrency exchange was only 18 months as a significant number of these exchanges were falling prey to crypto hacks, mismanagement, and also Bitcoin theft. It was estimated that around 50 exchanges shut down till date, most notably Cryptopia and Mount Gox, and since the start of 2019, 8 exchanges had shut down in the industry.

The exchanges which were shut down for the year 2019 were Coinome, Coinpulse, Coinnest, Coinroom, Liquid Exchange, QuadrigaCX, Cryptopia and Gate coin.

Whereas the likes of Coinome, Coinpulse fell prey to “less favorable conditions”, major exchanges like Cryptopia could not recover after witnessing a major hack and aftermath, could not maintain their businesses even after cutting losses. The reasons remain on similar grounds for the other exchanges as exchanges are often crushed with the agonizing load of protecting the funds and keeping up with regulations that restrict the overall trading acumen.

Whenever an exchange shuts down or a hack takes place, multiple questions are pledged against the overall security of these crypto asset exchanges, and a cloud of doubt personifies over them. It suggestively also affects the price of Bitcoin, as seen in the past after the fall of Mount Gox.

The topic regarding exchanges being attacked by hackers is a conditional one as Binance suffered to network breach a few weeks where a sum of 7000 BTC were stolen. In this scenario, the theft was not significantly damaging but it raises a concern, as to what limits these exchanges are secured.

Moreover, the adoption of digital currencies is stagnated as potential investors might indicate a reluctance to put forward their capital onto an asset that is regularly under the threat of cybercriminals or bankruptcy faced by their handlers.

The post 8 crypto exchanges were shut down in 2019; how does that affect the overall crypto space? appeared first on AMBCrypto.