Dovey Wan, a funding partner at Primitive Ventures and notable cryptocurrency influencer, confirmed the news via a tweet. She stated that the “local liquidity” will be adversely impacted, given the severity of OTC transactions that take place via the messaging application.

“Urgh, Wechat just updated its payment policy .. merchant can’t serve any token issuance/fund raising or crypto trading activities, otherwise account will be terminated
Given most OTC transactions are happening in wechat, this may impact local liquidity to quite some extent”

The Chinese messaging platform will terminate the accounts of those who use their services for trading cryptocurrencies. According to WeChat’s payment policy change, “merchants may not engage in illegal transactions such as virtual currency.” 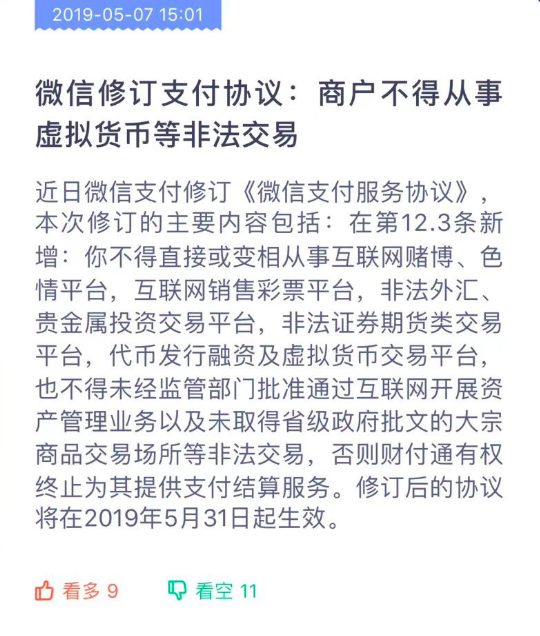 WeChat’s stern stance is not against the virtual currency sector alone, with transactions related to online gambling and pornography also leading to account termination. This rule will however, only be enforced from May 31.

The exodus of cryptocurrency transactions from China’s messaging mainstay is part of a long-term plan to weed out decentralized currency as a whole from the country. Back in 2017, the government placed an exchange and ICO ban and more recently, moved to outrightly ban the country’s globally dominant mining industry.

China has in the past exercised its authority over WeChat to irk the country’s cryptocurrency community. In August 2018, the government cracked down on several public WeChat accounts, citing violation of the messaging platform’s terms.

Several analysts have pointed out that the Bitcoin [BTC] price collapse from $7,300 to under $6,300 in early September 2018 was directly due to the WeChat de-platforming, despite the Goldman Sachs crypto-trading desk rumors being put to bed at the same time.

“This is a classic example of short term pain, long term gain. It is inconvenient for people short term, and they take a hit. But long term, it is precisely this type of restriction of freedom that will push people to use crypto. Not a bad thing.”

Given crypto’s ‘under the hood’ dominance in China, this OTC trading crackdown could be a larger effort on the part of the messaging giant to force users to migrate to WeChat pay. However, given the degree of control exercised by the Chinese government, “restrictions” will eventually be placed on WeChat as well, stated CZ. He concluded,

“Honestly, it would be hard to beat WeChat pay if they are relatively open. (The UX is good). But more and more restrictions are forced upon them (probably not their own choice). Go #crypto!”