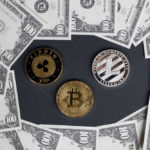 Congress’s think tank, Congressional Research Service (CRS) released a report, which inspects the future prospects and impact of cryptocurrencies on the US retail sector.  CRS dismisses the notion of crypto assets serving as a viable payment instrument.

The Congressional Research Service or think tank of Congress is a public policy research wing of the United States Congress. CRS was appointed to consult with US lawmakers regarding cryptocurrency and its prospective role in the retail market of the US.

According to the report, although cash still holds its position of unchallenged supremacy but substitute payment methods are slowly but surely taking over. This is evident from the increasing number of retailers, preferring credit and debit cards over cash transactions.
Furthermore, the report investigated whether the emergence of cryptocurrency will have any impact on the US retail landscape, and it turns out that it won’t. As CRS claims that the cryptocurrency, Bitcoin is being used as a “speculative investment vehicle “and the traders are unwilling to rely on cryptocurrency due to its volatile nature and uncertain regulations.
The state of Wyoming, in the United States, recognized digital currencies as legal tender; however, the rest of the country is still indecisive about the status of cryptocurrencies.