As Tether/Bitfinex controversy continues to brew, the oldest stablecoin, a new twist to the tale brings the US-based cryptocurrency exchange, Kraken into the pot. According to the recent Diar report, Tether reserves dropped by 26%, following which, the stablecoin’s “arbitrage opportunities” increased by 5% on one of the leading exchange, Kraken.

Price arbitrage means the price irregularity of the same asset across different exchange platforms. The difference in the price of the asset gives traders the opportunity to purchase the asset on the exchange trading at a lower price and selling it off on a platform with a higher trading price.

For traditional assets, arbitrage is quite common, but highly uncommon in case of stablecoins. Stablecoins are pegged with the Dollar. Hence, the asset should be stable and priced at $1, neither exceeding nor falling below the value of $1.

The New York Attorney General revealed that the exchange lost $850 million and used Tether to cover up the same. Post the Bitfinex-Tether episode that led to a brief market crash, a significant spread in the prices of Bitcoin was recorded on Bitfinex, as opposed to other exchanges.

An increasing spread on Kraken’s trading platform was witnessed in the report published by Diar which contradicted the basis of “stablecoin.” 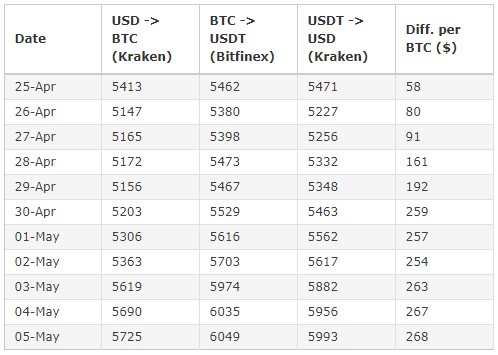 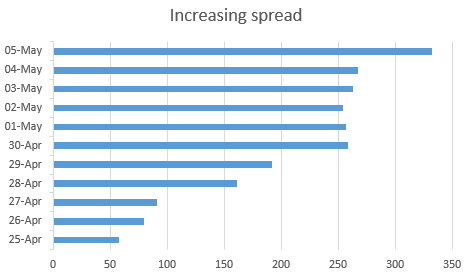 On 25th April, the day the news broke out, a difference of $58 per BTC in Kraken questioned the true value of USDT on its platform. This spread eventually increased to $268 per BTC on 5th May. From the above chart, a significantly increasing spread was noticed. As per the report, arbitrage opportunities reached 5% on Kraken.

The report also mentioned Tether to be “contentious” as the stablecoin has been embroiled in controversies including allegations of Fractional Banking and avoiding audits which would confirm that the stablecoin was backed by an appropriate amount of USD, giving rise to speculations that Tether might not be completely backed by fiat.