Owing to its digital nature, the cryptocurrency ecosystem has been riddled with bugs that have proven detrimental to the cryptosphere. From exchanges to wallets, almost all elements of the cryptoverse are prone to attacks and security vulnerabilities. Bug bounty programs have played a major role in cutting down losses and tracing major security loopholes, before they are taken advantage of.

According to latest reports, ethical hackers ‘earned’ almost $32,000 in seven weeks by fixing bugs on Tron, Brave, EOS, Coinbase, and more, via bug bounty programs. Between March 28 and May 16, almost 15 blockchain ventures paid rewards to security researchers for finding vulnerabilities. According to Hard Fork, the highest bugs were reported from OmiseGo, the cryptocurrency of the software firm, Omise. Bug bounty hunters found six bugs on the platform, according to a report released by the firm.

Augur and Brave software, makers of the Brave browser, also made the list. In terms of number of bugs uncovered, both brands had a score of three each. Tron, Monero, Cobinhood, Chainlink, Electroneum, and MyEtherWallet had two bugs each. Further, Aeternity, Block.one, Blockchain.com, blockimo, blockstack, and Coinbase reported one bug each. 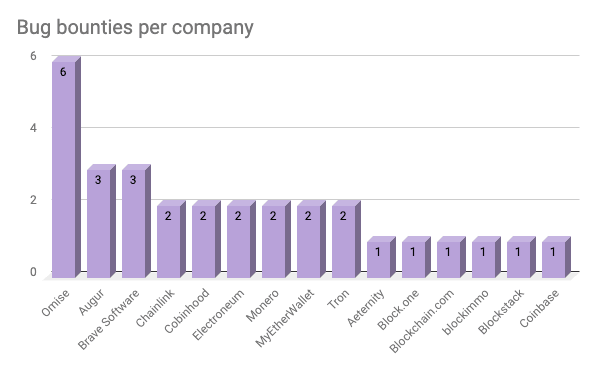 Hacker rewards are decided based on how serious the detected bug is, and the importance of the security flaw. Omise gave away a maximum of $100 to bug bounty hunters for the six vulnerabilities detected, whereas others were of a higher value.

Aeternity and Block.one, a firm based on the EOS blockchain, paid a reward of $10,000 for a single fix each. Tron paid a sum of $3,100 to a hacker for detecting a very crucial flaw in the system, a flaw which could have resulted in the Tron network being bricked to a certain extent.