Big banks are riding a FOMO wave as the Bitcoin bull-run is just beginning. Spearheaded by the changing colors of JP Morgan, which recently forayed into the digital assets world, the banking elite is now suggesting that their initial stance on Bitcoin and the larger cryptocurrency world might have been off.

Based on the article by Bloomberg, the price of the coin would reverse towards the end of December 2018 and then make marginal gains until May 2019, all under the $5,000 mark. In reality, the BTC price, after dropping to “rock bottom” at just above $3,100 in early December 2018, edged upwards.

Several spurts of growth were seen in early January and February, prior to a massive April ascendance. On April 2, Bitcoin did away with the bank’s value mode and amassed a daily gain of over 15 percent, fuelling its current rise. Breaking the $5,000 ceiling in the process, which was pegged to remain intact well into May 2019, the king coin is now almost $3,000 ahead of the mark and is not looking to stop. 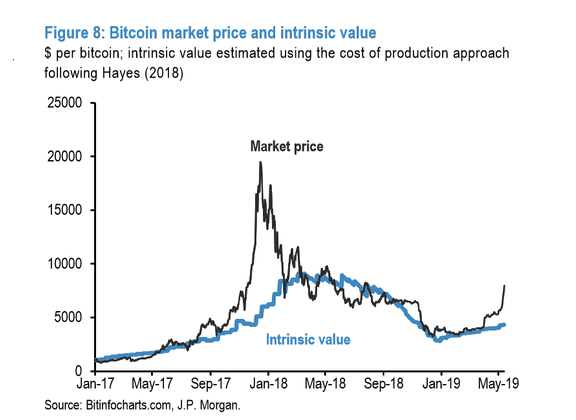 It should be noted that JP Morgan’s “intrinsic value” is calculated on the basis of the marginal cost of production, electricity prices, and hash rates. This model does not take into account, at least on absolute terms, the anticipatory effect of the 2020 halving, which, according to a slew of analysts is the behind the price rise.

Nikolaos Panigirtzoglou, the MD in the Global Market Strategy team at JP Morgan stated that Bitcoin breaking through its “intrinsic value” showed signs of mirroring its 2017 bull run. He evidenced this move by comparing the pre-December 2017 slump to the one seen prior to the current bullish swing.

“Over the past few days, the actual price has moved sharply over marginal cost. This divergence between actual and intrinsic values carries some echoes of the spike higher in late 2017, and at the time this divergence was resolved mostly by a reduction in actual prices.”

With the analyst admitting that the imparting of an “intrinsic or fair value” to a cryptocurrency, much less a volatile one like Bitcoin, is a “challenging” ordeal, a mere JP Morgan acknowledgement of a Bitcoin bull-run is a remarkable sign for the digital assets industry, especially given the bank’s and its CEO Jamie Dimon’s Bitcoin-bashing in the past.

Mati Greenspan, senior market analyst at eToro attested to the same, adding a key point that JP Morgan failed to take into account in their calculation. He stated:

“Great to see JPM finally admitting that Bitcoin has intrinsic value.
Now wait till they understand that miners who run a surplus tend to begin hording.”

Despite Bitcoin slumping at press time, recording a 1.23 percent decline against the dollar, the prospects look positive. After recording a massive gain on 19 May, briefly surging past $8,000 for the second time in a week, Bitcoin created a High-Low [HL] at $7,100, which many analysts look at with glee.

This HL immediately following last week’s pull-back caused due to post-Consensus bears, a Bitstamp sell-order and market correction showed the king coin’s bullish persistence and can even be a foundation for a $9,000 ascendance, defying any “intrinsic value” expectations.