Ethereum recorded a significant surge in its valuation on the back of reports suggesting that the U.S. Commodity Futures Trading Commission [CFTC] was “comfortable” approving Ether futures contact. On another positive note for the second largest cryptocurrency, Ethereum transaction volume for its decentralized applications [DApps] hit an all-time high, according to the latest Diar research.

Lately, Tron and EOS DApps had somewhat shadowed the activity of Ethereum. However, new research revealed that Ether transaction volumes spiked in the month of April.

In April this year, 776,000 ETH transactions on DApps were recorded as part of the on-chain activity prompted by the four-month upward trend, the report stated. Decentralized exchanges or DEX, and gambling apps contributed to a total DApp transaction of $132 million. Further, Ether surged in both Ether and U.S.-Dollar valued transaction volume, according to the report. It stated,

“This year is the most prolonged period of growth in terms of transacted volumes DApps have witnessed, ever.” 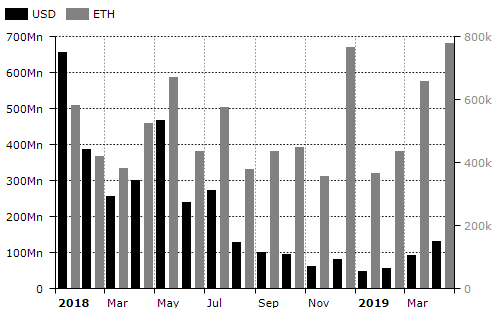 However, transactions for new DApps added on Ethereum’s network reflected similar figures to that of 2017. Only 88 new DApps were deployed in the month of April 2019. Despite the decline of new on-chain DApps, Ethereum continued to dominate the DApps space, contributing to 60% of the total for the month of April. 178 DApps were deployed in December 2018 across multiple platforms, shortly after which the figures went downhill, the report cited.

Another notable observation was Truffle Framework downloads hitting an all-time high of 327.6K in the first quarter of 2019, after showing significant growth in each quarter since 2016. The report also suggested that a major hindrance for developers is the low scalability of the blockchain’s infrastructure.

The surge was speculated to be driven by Ethereum Co-founder, Vitalik Buterin, recently proposing updated staking rewards for the forthcoming PoS implementation on Ethereum’s network.