The cryptocurrency market, still in its nascent stage, has been undergoing many developments and offering more use cases to people all over the world. The developments in the field have also led countries to pay heed to cryptos and accept it. The latest addition to this list was the United Arab Emirates, which was considering the launch of a regulated custodian and trading platform on BitOasis exchange.

However, according to a recent post on Reddit, the exchange delisted Monero [XMR] and ZCash [ZEC]. Various Twitter users appeared agitated with the exchange as they had de-listed the coins much before announcing it. Twitter user, @mohabbadi11, tweeted to the exchange:

“@bitoasis Suddenly you decided to stop trading with XMR and ZEC!!!what about informing people in advance?!”

BitOasis, after apologizing, told the user that they would be sharing more details on ZEC and XMR pairs soon, however, the exchange failed to update its users soon. According to a tweet by the exchange, it was going to release an update on May 19 via email. The image shared by a Reddit user was of an email they received from the exchange, however, the authenticity of the same had not been verified by the exchange. 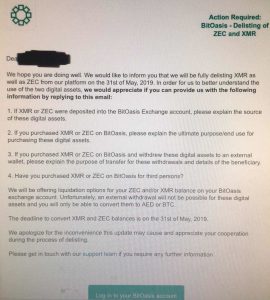 After receiving a de-listing email the Twitter user tweeted to BitOasis:

“@bitoasis its not possible to reply to your email about delisting ZEC and XMR.
What is the right way to get my money back?”

AMBCrypto has reached out to BitOasis for the same and the story will be updated once the exchange replies.