The saga of the hacked New Zealand-based cryptocurrency exchange, Cryptopia, doesn’t seem to end. Just a week after the exchange entered the liquidation process, over 30,000 ETH stolen from Cryptopia in January was transferred to an unknown wallet.

As confirmed by WhaleAlert, a tracker of large cryptocurrency-related transactions, the transfer occurred at 01:43:57 UTC on 20 May 2019. The exact amount in question was 30,790 ETH, valued at $7.74 million, at press time. 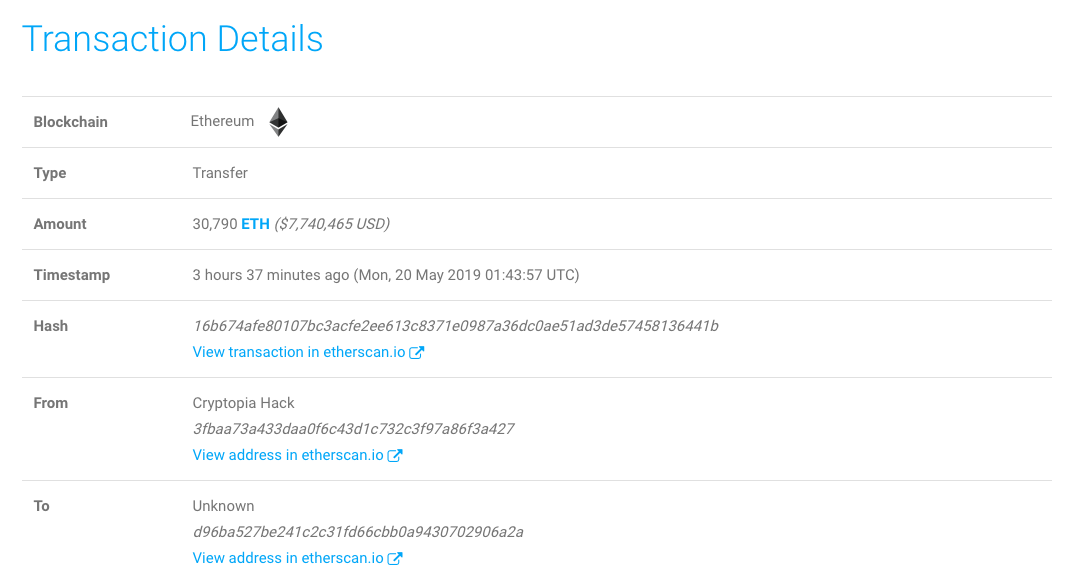 The exchange has not confirmed the incident, as of press time. However, on May 15, Cryptopia had made it clear to its remaining customer base to halt deposits immediately. Their tweet had read,

“PLEASE DO NOT SEND ANY DEPOSITS TO CRYPTOPIA.”

Last week, following queries from distressed customers after the exchange’s unscheduled maintenance halt, Cryptopia announced that it would be entering into a liquidation phase, carried out by Grant Thornton. Officials from the accounting firm confirmed that this process could take months.

Cryptopia’s problems began in January, when the exchange suffered what would be the first of two hacks. The first attack caused a loss of $16 million in ETH. Weeks after the January hack, a second attack took place and cost the exchange $180,000 in Ether. After weeks of confusion, the exchange resumed services in March 2019.

Interestingly, the address 3fbaa73a433daa0f6c43d1c732c3f97a86f3a427 prior to the recent transaction saw an outgoing transaction of 1 Ether, totaling the March amount.