Crypto Brahma gained popularity among the cryptoverse as a prominent investor and social influencer, as well as for running a paid membership group called ‘Moon Club’ for investment tips. The investor is in the news again after confessing to the misuse of investor funds. 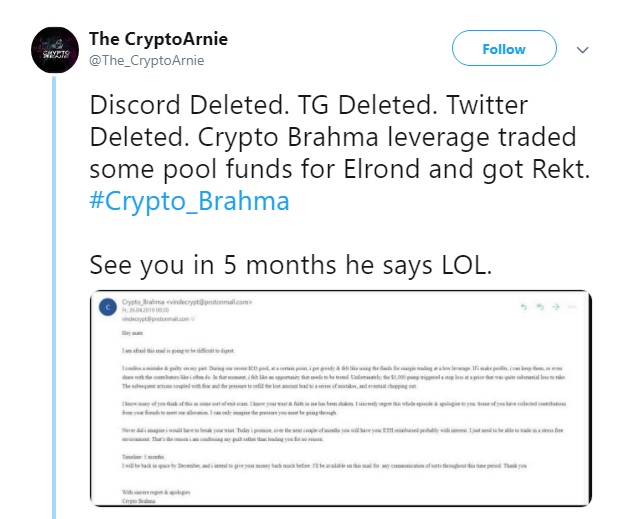 The email had Brahma confessing to “using ICO pool funds for margin trading,” which resulted in an unrecoverable loss of investor money. And while the community termed the entrepreneur’s actions as an exit scam strategy, Brahma expressed his regret in the email and apologized to the intended readers of the email. He further promised,

“You will have your ETH reimbursed probably with interest. I just need to be able to trade in a stress free environment. That’s the reason I’m confessing my guilt.”

The young influencer clarified his intent to return the ‘lost’ money before the self-declared deadline of December, and further declared his availability on emails for further communication.

Following the discovery of this email, Crypto Brahma’s disappearance from all social media, including Telegram, Discord, and Twitter, raised an uproar among the crypto-community. However, Crypto Brahma seemed to be keeping his TradingView account active, since he was found to be online on the website, during press time.

The ensuing crypto-panic was understandable since the crypto ecosystem has previously recorded a host of exit scams, resembling the current one.