Craig Wright, Chief Scientist at nChain and one often referred to as “Faketoshi” for claiming to be Satoshi Nakamoto, has filed for the copyright registration of the Bitcoin whitepaper and the Bitcoin software. The Bitcoin Whitepaper titled, ‘Bitcoin: A Peer-to-Peer Electronic Cash System,’ was published by Satoshi Nakamoto, the creator of Bitcoin in 2008. In the filing, Wright claims to be the pseudonymous author Satoshi Nakamoto.

Neeraj K. Agrawal from CoinCenter made the revelation via his social media handle,

Notably, Jerry Brito, Executive Director at CoinCenter, clarified that registering a copyright was “just filing a form.” He further stated that the copyright office had not investigated whether the claims are valid or not, adding that “they just register it.”

He went on to add,

“Unfortunately there is no official way to challenge a registration. If there are competing claims, the Office will just register all of them. Someone else could today also register themselves as the author of the white paper, thus inviting a suit from Wright and letting a court decide on the validity of the claim. I volunteer @petermccormack.” 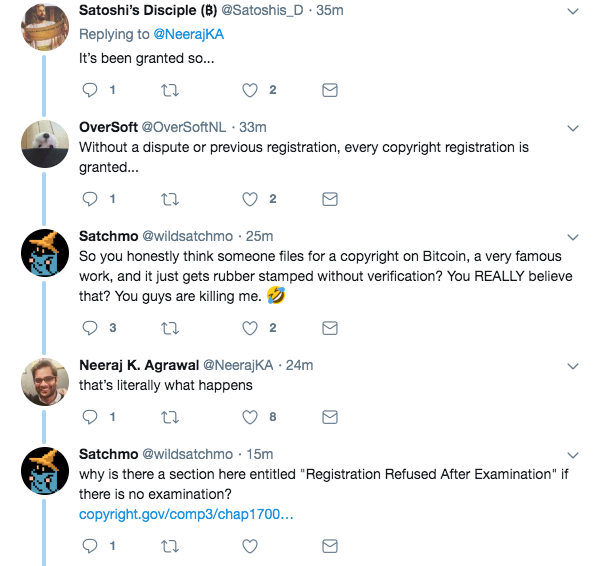 “False copyright registration is “copyfraud”. Unfortunately, no private right of action exists under relevant US copyright law, 18 U.S.C. § 506(e). Violations are punishable by a fine of up to $2,500. No company has ever been prosecuted for violating this.”