The crypto-winter is well and truly gone. With Bitcoin [BTC] riding wave-after-wave, the long-awaited spring is on the horizon. With the entire community is looking forward to a future rife with ETFs, institutional interest and halving-hikes, some have their eyes on the rear-view mirror.

Brian Armstrong, CEO of Coinbase, shed light on the divergence of cryptocurrency performance in South America, when compared to the overarching market. In a recent tweet, the CEO noted the “different pattern” of volumes in Latin American countries. He further claimed that there was ‘no crypto-winter,’ in these countries.

Interesting that the crypto market is following a totally different pattern in LatAm (source data from LocalBitcoins) – there was no winter. pic.twitter.com/4hPiAFpY18

The volume followed the larger market movement, rising in December 2017, owing to the BTC bull run, and dropping in 2018, as the crypto-winter set in. Notable dips were seen in August 2018 and January 2019, with a prominent peak in November 2018, owing to the BCH hardfork. 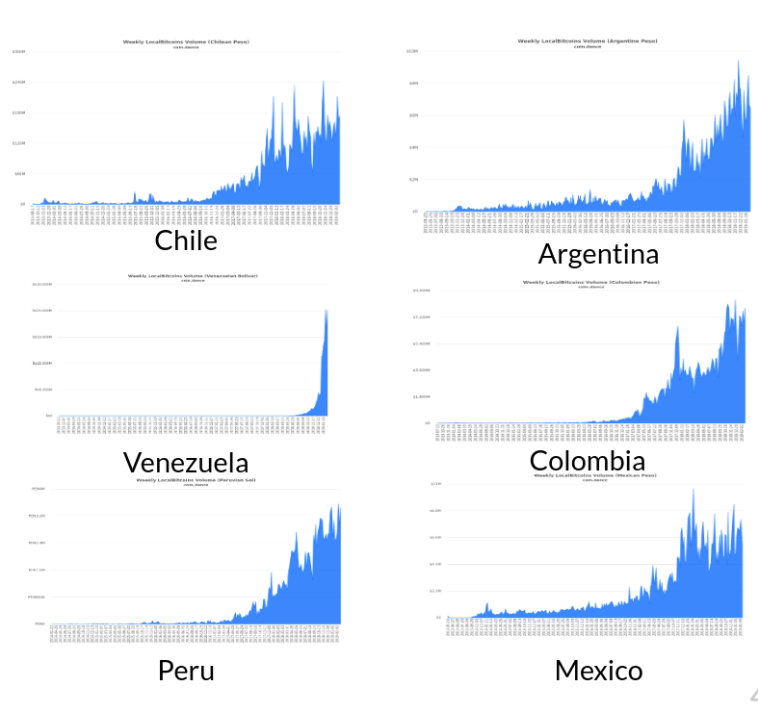 According to the charts presented by Armstrong, LATAM countries exhibited a complete divergence, showing massive volume spikes throughout 2018. Unlike the global chart which saw a trough during the previous year and a tower in December 2017, South American countries saw a surge over the past few months.

Chile saw an isolated pillar gathering, presumably due to short trading activity while Argentina and Colombia had its volume closely resembling the global chart.

Despite Armstrong’s claims of there being no crypto-winter, a currency conundrum can be pegged to be the reason for this divergence. Most countries in the list have seen their fiat currency drop against the US Dollar. Coupled with the surging growth of the cryptocurrency market, the incline was accelerated.

Earlier this month, Bitcoin broke its all-time-high [ATH] against the Argentinean Peso [ARS], following the former’s $8,000 breakout and the latter’s disastrous performance due to economic and political turmoil.

“Those graphics are denominated in National Currencies, so while you can see a decline in actual BTC being sold, inflation can you show as “more volume” being generated by operations.”

The post Coinbase CEO claims there was ‘no crypto-winter’ in Latin America, citing volume inconsistencies appeared first on AMBCrypto.