The Bitfinex/Tether episode made headlines in the crypto community over the past week. The repercussions were felt even in the market as Bitcoin [BTC] plummeted by almost $400 after news broke out that Bitfinex used Tether reserves to cover up its undisclosed losses, speculated to amount to $850 million.

According to an official statement released by Tether representatives, the stablecoin currently faces a 26 percent shortfall in capital reserves, when pegged against the outstanding Tether token. The situation raises systemic risk concerns as Bitfinex was granted a loan of cash from the stablecoin operators.

Bitfinex suffered a significant loss after its payment processing partners, Crypto Capital, seized the staggering $850 million. The incident left Bitfinex in dire need of capital to fund its operating expenses and the exchange leaned towards its stablecoin reserves to save face.

Stuart Hoegner, Tether and Bitfinex General Counsel, confirmed that Tether was operating on a fractional reserve after the New York General Attorney released a statement announcing further investigation into the terms of the agreement between the two organizations.

According to a report by Diar, Tether had backed-up its reserves against every outstanding token, up until the recent change in regulations in terms of service, which implied that the organization would consider capital-equivalent assets.  Stuart Hoegner had also mentioned in an affidavit that the stablecoin held an estimated $1.2 billion. 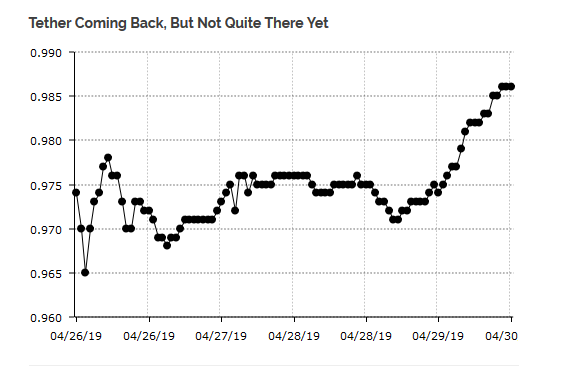 However, according to the chart, the price of Tether was far less affected than when Tether hit its low last October, dropping to $0.95. At press time, the stablecoin was pegged at $0.9924 with the US dollar on Kraken exchange.

At press time, Tether did not back the exact amount for the outstanding tokens [around $2.8 billion], but its market capitalization stature kept the “unstable” stablecoin pegged with virtual currencies on exchanges, despite the fact that secured alternatives which complied with US regulations were also available.

Tether currently represented the shares as part of the loan agreement between the two organizations, since its attention has now shifted towards securities territory as a large size of its reserves was going to be on the back of an exchange.

The post Bitfinex-Tether episode hardly affects stablecoin; continues to be pegged with cryptos despite systematic risk appeared first on AMBCrypto.