2019 has been a good year for cryptocurrencies, with the market surviving the long crypto-winter. The market collectively surged over the past two months, with Bitcoin [BTC] being one of the most prominent performers. Volatility has been a consistent feature of these past two months.

A major decline was observed was on the 17 May, 2019 when the entire market collectively witnessed de-valuation and Bitcoin’s price dropped from $7,700 to $6,600 over an hour.

However, CoinMetrics has suggested that the abrupt movement in prices was enforced to “trigger” a long squeeze, through forced liquidations for long Bitcoin futures positions. According to the research conducted by them, the market was conditioned for a long squeeze.

“Focused selling was observed on Bitstamp’s BTC-US Dollar market resulting in a sharp divergence in Bitstamp’s price relative to other major exchanges. Bitstamp was likely targeted because, at the time, it was one of two constituent markets used in the calculation of Bitmex’s bitcoin index.” 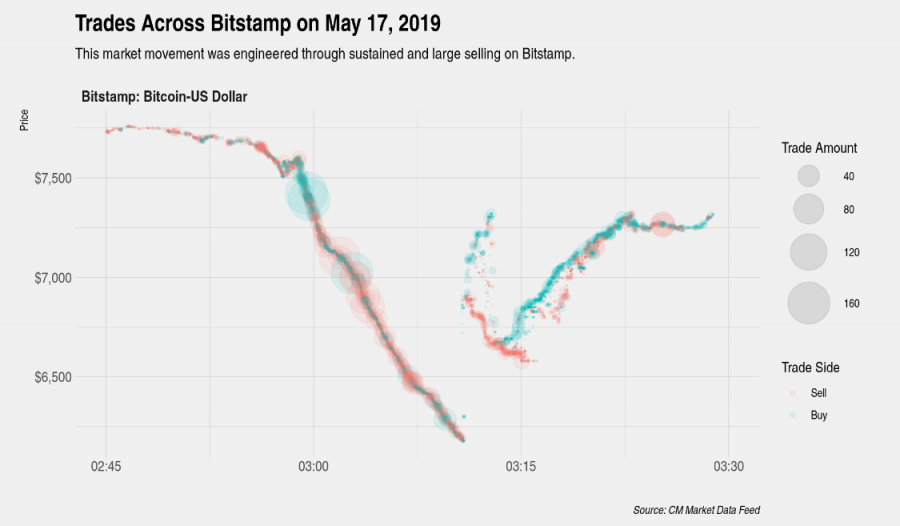 At around 03:00 UTC, part of the sale was witnessed on Bitfinex and it was followed by heavy “sustained” selling on Bitstamp. It was speculated that the selling on Bitstamp was timely executed to maximize price impact, and following the sale, a $300 discount was evident on Bitstamp, in comparison to other exchanges. Price corrections followed after, as a short and volatile period was recorded.

The data released was very conclusive that in the short-term, some price movements were orchestrated to trigger squeezes in the market. The factors laid down by the website were,

2. The fragmented, 24/7 nature of crypto markets results in an easier ability to have a market impact when buying or selling large positions.

Long-term crypto prices are usually dictated by relevant market cycles and fundamentals, but the aforementioned data suggested that for a short period, market manipulation was recorded in order to improve market positions.

The post Bitcoin’s [BTC] fall on 17 May was engineered via ‘sustained selling on Bitstamp,’ suggests Coinmetrics appeared first on AMBCrypto.