Bitcoin Cash may have fended off the hacker who abused the network upgrade, it may have also upgraded its privacy by implementing Schnorr Signatures, but there is something dangerous happening behind the scenes, which could have a detrimental effect.

Bitcoin Cash’s hashrate, at press time, came very close to being controlled by one single entity, BTC.top. Nine hours ago, the same entity controlled more than 51% of the hashrate, according to a Reddit post. 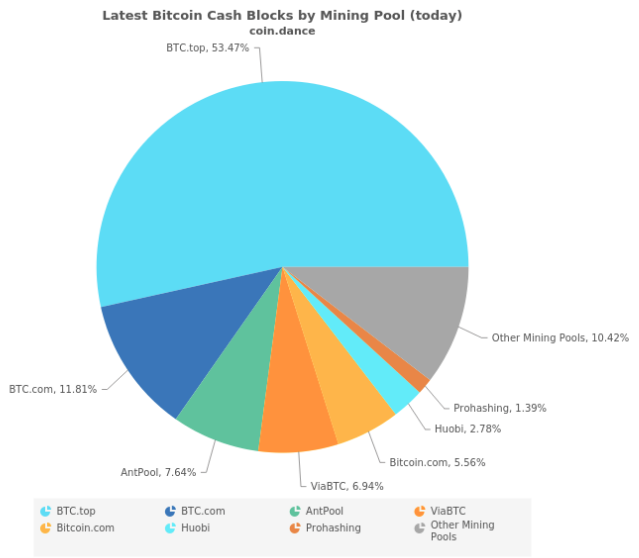 The attached image showed that BTC.top controlled 54% of the hashrate which would give that pool, the power to double spend any and all Bitcoin Cash, halt transactions and successfully launch a 51% attack on the fourth largest cryptocurrency in the world.

At press time, however, the control of BTC.top waned to 44.44%, which is still a huge amount of control for any entity to have, considering the decentralized nature of Bitcoin Cash and cryptocurrencies in general.

This is not the first time, BTC.top has come close or crossed over the 50% line with Bitcoin Cash. On January 3, 2019, BTC.top controlled about 50.2% of the total hashrate for Bitcoin Cash. BTC.top is a China-based private entity.

Moreover, the pool mined about 7 consecutive blocks 10 hours ago; this is a dire circumstance for Bitcoin Cash if the pool decides to use that hashrate.

“Someone is clearly attacking BCH, which I would speculate to be Calvin and his dipshit lapdog. Some mystery miner pumped up the “unknown” side up by 10-15% which backed off right after the fork. Then the zero-day bug exploit on fork day that coincided with a massive short position… “

Although BTC.top controls a majority of the hashrate for Bitcoin Cash, the recent update i..e, Bitcoin Cash ABC 0.18.5 has implemented a checkpoint after every 10 blocks. According to @Bitcoin_ABC’s tweet after the 0.18.5 update:

“This release adds deep reorg protection to ensure that transactions are immutable after 10 confirmations. This safeguard helps users, businesses, and exchanges stay secure and free from disruption.”

In comparison to Bitcoin, the original blockchain from which Bitcoin cash forked off has its hashrate spread out between different entities as seen in the chart below.

The post Bitcoin Cash’s hashrate comes dangerously close to being controlled by one mining pool appeared first on AMBCrypto.