With Bitcoin surging over $6,000 and only days later, on the verge of breaking the $7,000 mark, the bulls of previous year’s rallies have been re-awakened. On the back of this massive rally, the collective market capitalization skyrocketed over $200 billion for the first time in almost six months.

Just last week, the top cryptocurrency broke through the $100 billion market cap ceiling for the first time since November 2018, leading to a dissipation of bearish swings and corrections and FOMO settling in. With $6,000 on the horizon, many analysts pegged Bitcoin to face stiff resistance at $5,800 and at $6,300, but the crypto managed to surge above the levels and is poised for a $7,000 ascendance soon.

The collective market began the week at a $20 billion disparity against the $200 billion milestone, but with the top coin’s incredible movements, the ceiling was broken at around 0500 UTC on 11 May. The notable incline, which took the market cap over the line, began at 1700 UTC on the previous day and in less than 12 hours, the coin added over $10 billion to the market cap to help it reach $202.79 billion.

Bitcoin has seen its dominance surge in correlation to its price, not just with the recent price rally, but since the April ascendance began. On April 2, when the first inkling of the bull-run surfaced, with Bitcoin exhibiting a daily gain of over 17 percent and rising above $5,000, the market dominance of the cryptocurrency rose from being on the brink of falling below 50 percent to 52.3 percent within days.

Following the early-April rise, when Bitcoin broke the $5,500 mark on April 23, the market dominance rose to 54.5 percent and by the end of the first week of May, Bitcoin’s hold on the market was over 55.5 percent. Beginning Tuesday, May 7, the market share saw an upward rally, rising from 55.3 percent to 59.2 percent, at press time.

Interestingly, the last time Bitcoin had such massive dominance in the collective market was in December 2017, prior to the CME and CBOE release of Bitcoin Futures contract, which triggered the bull-run. Peaking at 65.63 percent market majority on December 8, 2017, BTC dominance began to fall, plummeting to 32.6 percent in January 2018 and breaking majority only in August. Since then, the top cryptocurrency has consistently held over 50 percent of the market, with the recent dominance its highest in over 14 months. 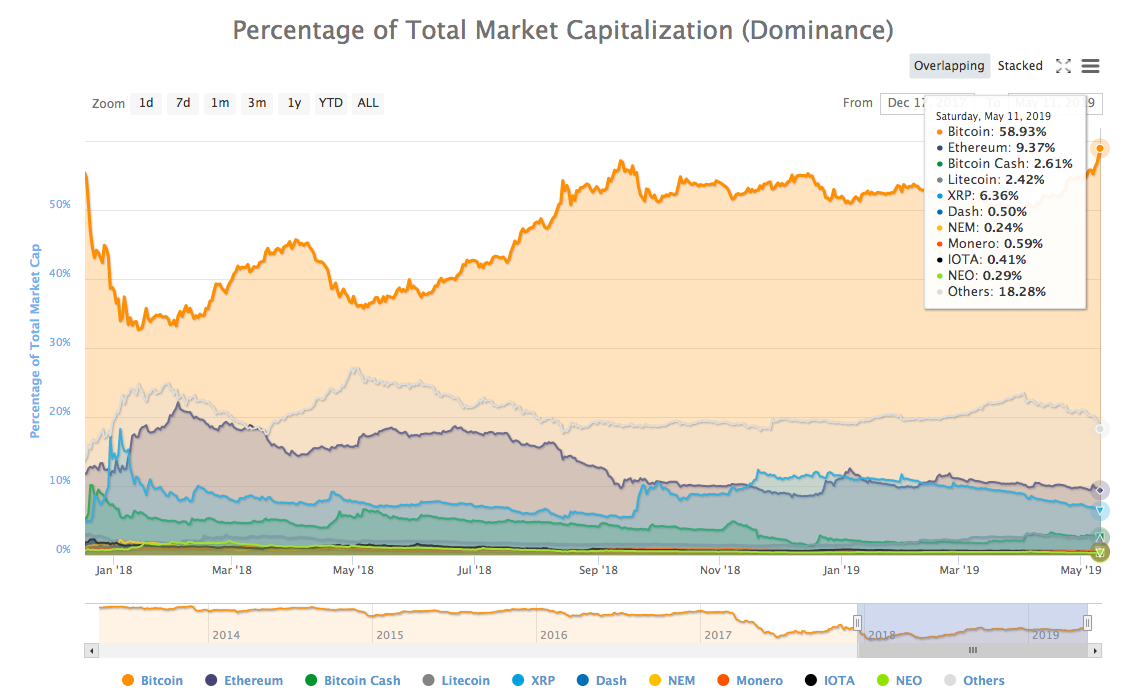 Many analysts expect altcoins to be buoyed by this BTC bullish swing, chiming in with massive price increases, but not budging the king coin’s market share.

“If BTC keeps going up, I think at some point $ALTS will explode like they did in late 2017. Sucks having such a high exposure to alts in the meantime, but it’ll pay off.”

However, on the flipside, some analysts expect this to be a death knell for altcoins. Josh Rager, a cryptocurrency trader and an  Advisory Team member of Level Invest and Token Bacon, stated:

“If it continues to push up, Bitcoin dominance will hit highs not seen since Dec 2017
And if you don’t know what this means….. it means your alt coins are dead inside.”